It was a good Thanksgiving. All of the family was able to be there. Dinner was in the house where the kids grew up and consisted of all the family favorites. Turkey, smoked turkey, spiral ham, dressing, giblet gravy, green beans, corn, yeast rolls, cheesecake and love was served up in great quantity. It was a good day and time.

I hitched up on Sunday after Thanksgiving. It had been a month since I had hitched up and was out of practice. When I was moving every 3 to 4 days, I could pack and hitch in a short time. However, after sitting for a month, it took most of Saturday just to get everything ready to roll. I had to double check everything I did to make sure I wasn't forgetting anything. I apparently didn't forget anything because I had a successful move down to Duson, Louisiana. This is the campground I use when visiting my sister who lives in Lafayette, Louisiana. It is located just off of I-10 and about 30 minutes from her house. 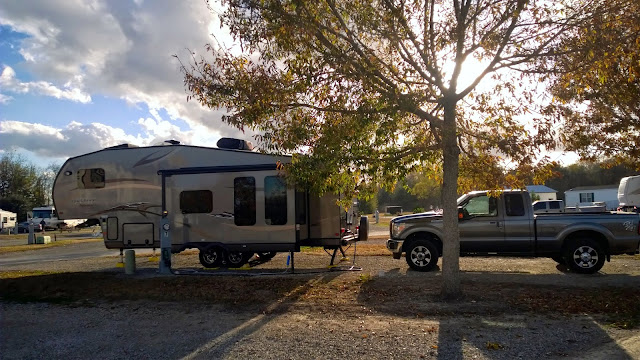 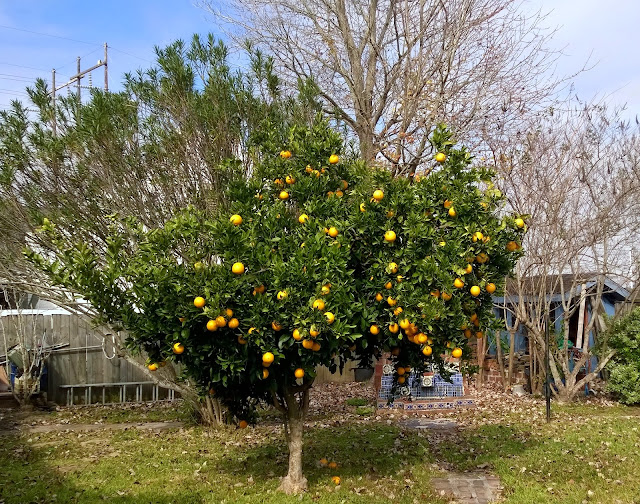 Nice orange tree in my sister's backyard. They are ready to pick and were sweet and juicy. I left with about 6 in a bag. 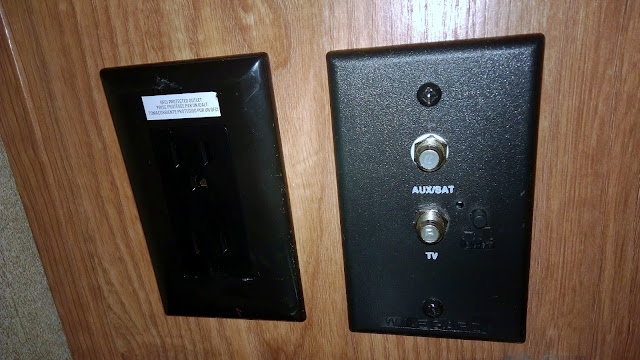 I have been living in Liberty for a little over a year. In that time I've stayed in about 60+ campgrounds. A few of them offered cable TV as one of their amenities. Liberty has a place outside to connect cable and satellite so I would connect up but only get a blurry picture. I checked the connections behind the TV and behind the wall, but the picture never cleared up. I figured it was a problem with the campground so blew it off since I had gotten used to not watching much TV and when I did watch it was whatever the antenna on top of Liberty would pick up. A few campgrounds later I tried again and had the result; blurry picture. I then thought it was some bad wiring inside Liberty and I would track it down someday, but never got around to it. Well, while camped in Mansfield, I was cleaning out some stuff from a cabinet below the TV. I noticed a switch, which is the switch in the picture above. It is a black push button switch and located to the right of connection labeled TV. I got a flashlight and put my head inside the cabinet so I could read what it said. Danged if it didn't say, Cable/Antenna. So, since the campground I'm in now offers cable, I hooked up and pushed the button. Bingo, 60 crisp and clear channels. I sure was smart in finding that button. Antenna TV is an acquired taste which I developed over that last year, but cable ain't bad either. I wonder what other buttons are around here that I don't know about,,,,hmmmmm. Inquiring minds.

Ya'll take care of each other. Cya down the road.
Posted by Darrell at 9:41 PM