I pulled out of Beaumont around 10:00 yesterday morning. It was a short tow of about 130 miles but it was through Houston which had me a little bit worried as to traffic. I had towed Liberty through Houston about a year ago and was very surprised by the amount of traffic. It had parts of me puckered up pretty good. Yesterday was the opposite. Except for a few times when it got a little congested, I slipped right through on the I-610 loop around the north side. I got to this state park about 12:30 and was given the choice of about 50 campsites. I chose one, set up and went back to the office to finish the paperwork. A park ranger was coming out of the office and said they were closing early and I could finish checking in, in the morning. It seemed strange since there were 2 park ranger vehicles at the office and I had seen no less than 3 "camp hosts" inside the park. But it didn't bother me too much and I went on to Walmart to get a few groceries. Before shopping I stopped at a Whataburger and had a great hamburger and fries. I wonder why other places haven't started offering spicy ketchup like Whataburger? I picked up a couple steaks and headed back to the campground.

There isn't a lot to see and do around this area. One of the things I had planned was to do the factory tour for Blue Bell Ice Cream in Brenham which is about 30 miles away. Lucky for me I checked online and found out tours weren't being offered on the days I'm going to be here. Oh well, I guess I will just kick back and relax until I pull out on Thursday. 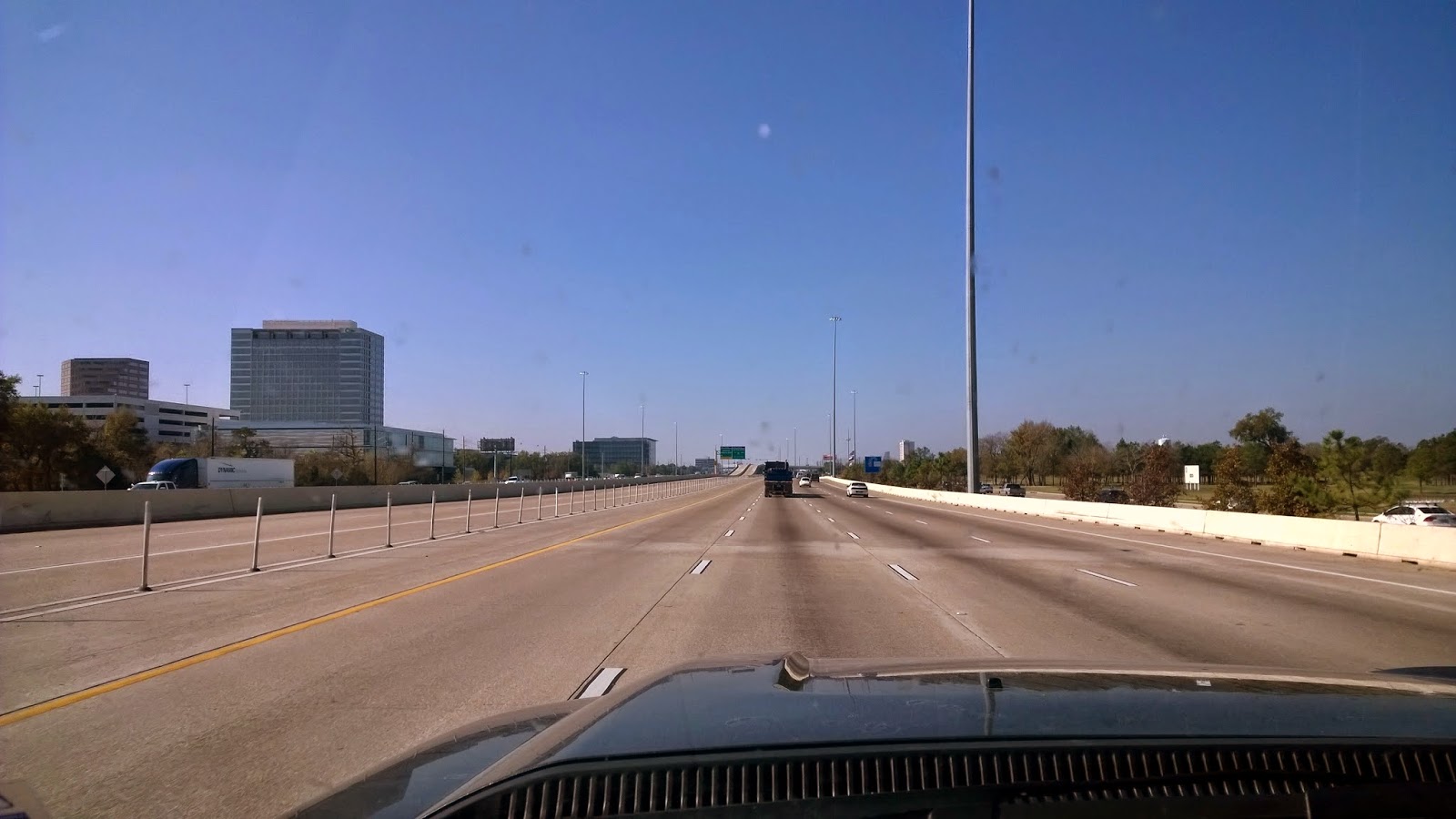 Empty lanes going through Houston. I got lucky with no traffic 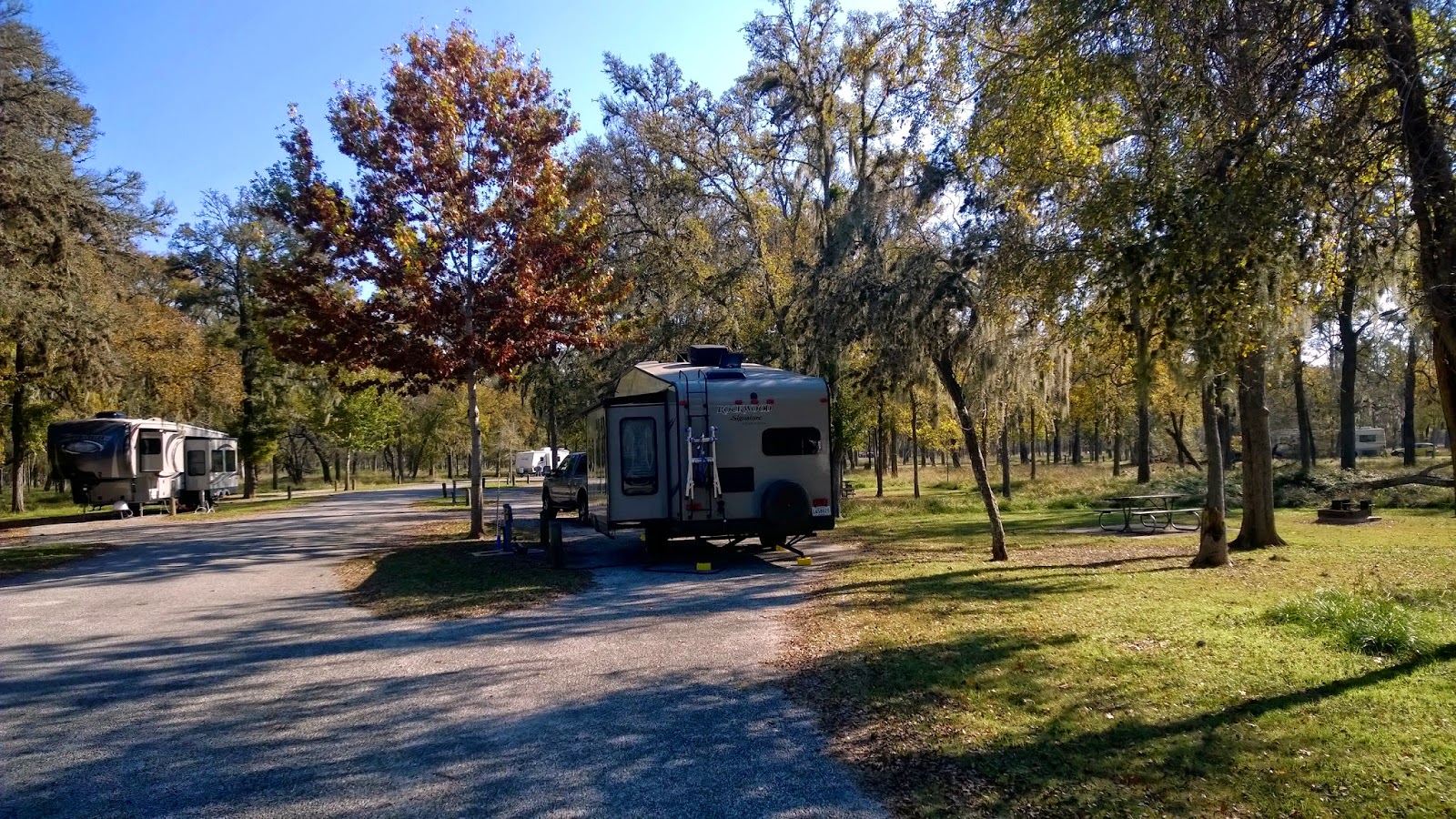 My campsite in Stephen F. Austin State Park. I have my own little tree with autumn colors. 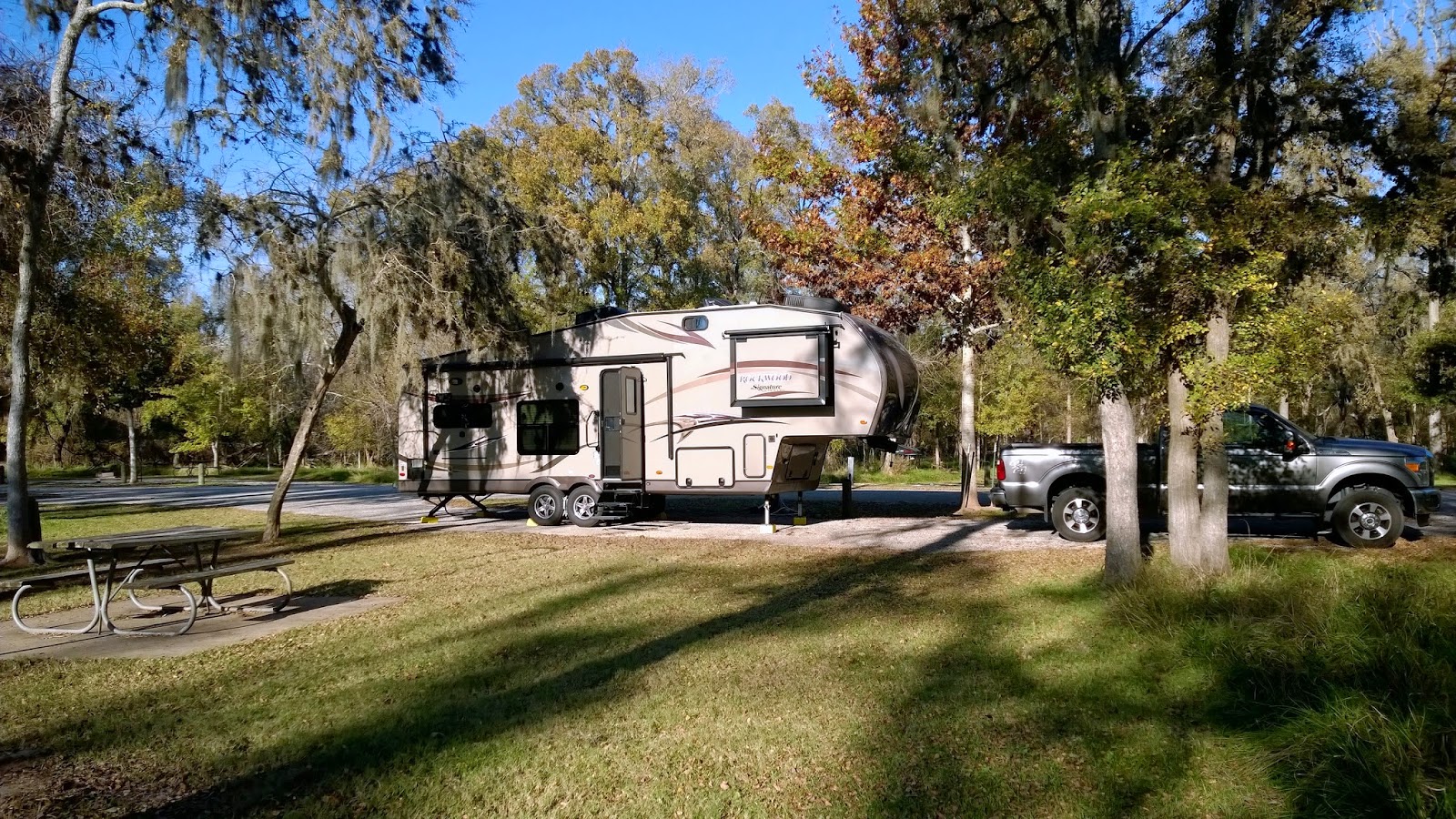 I picked this site because of the open western sky. Once the sun goes down it gets chilly and the setting sun helps keep Liberty a little warmer. 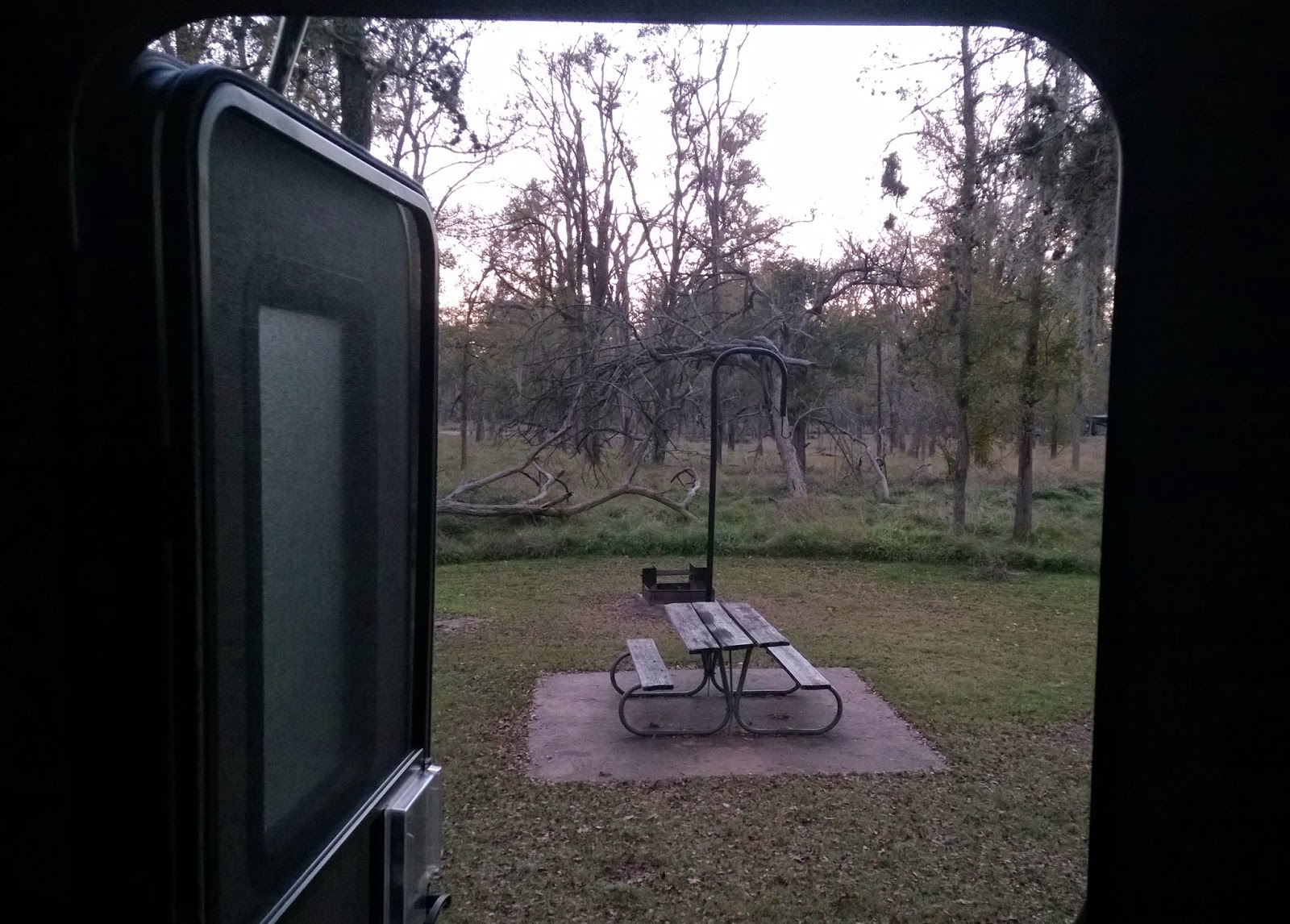 The view out my door. 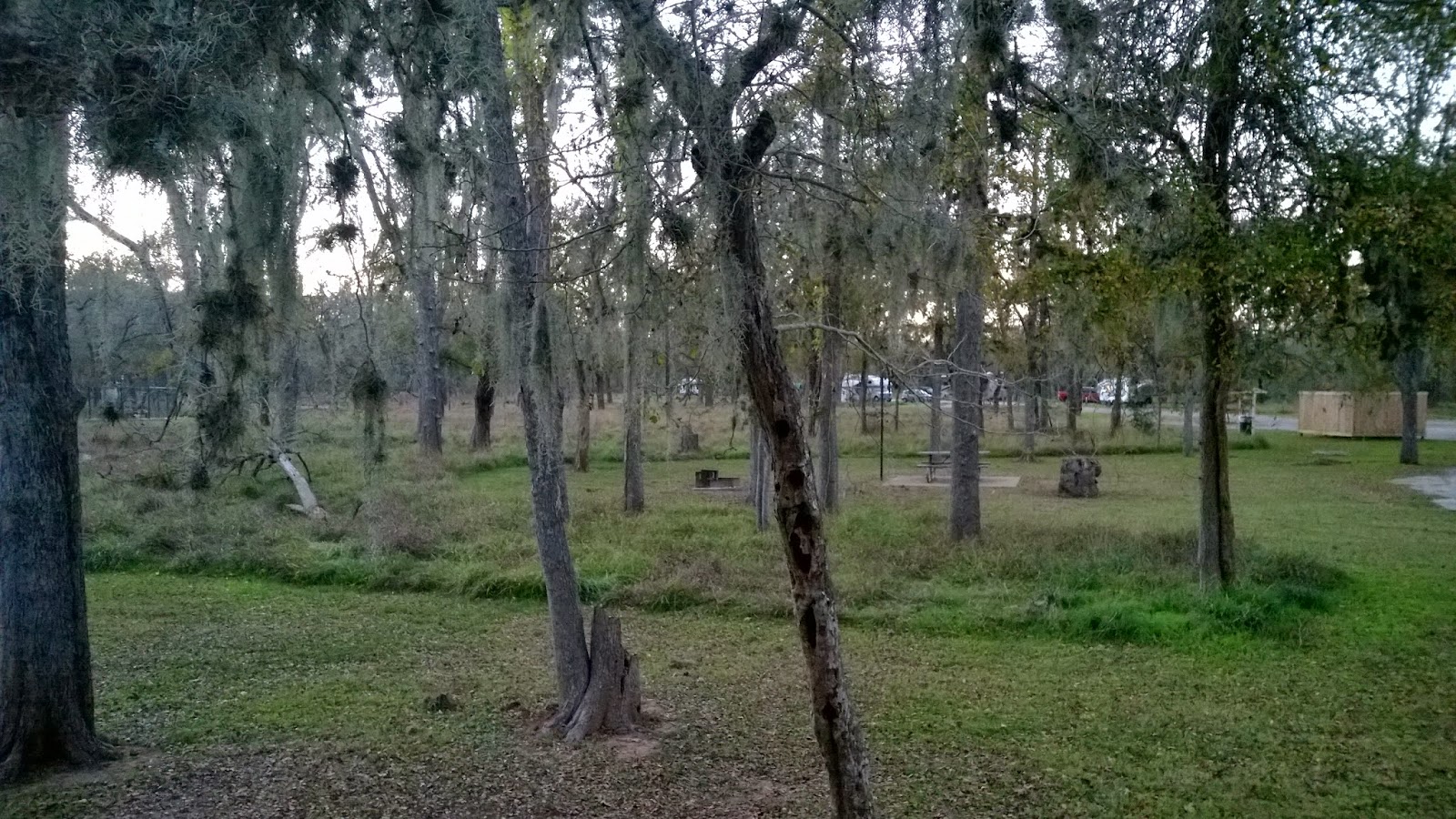 My new back yard, with lots of spanish moss hanging from the trees. 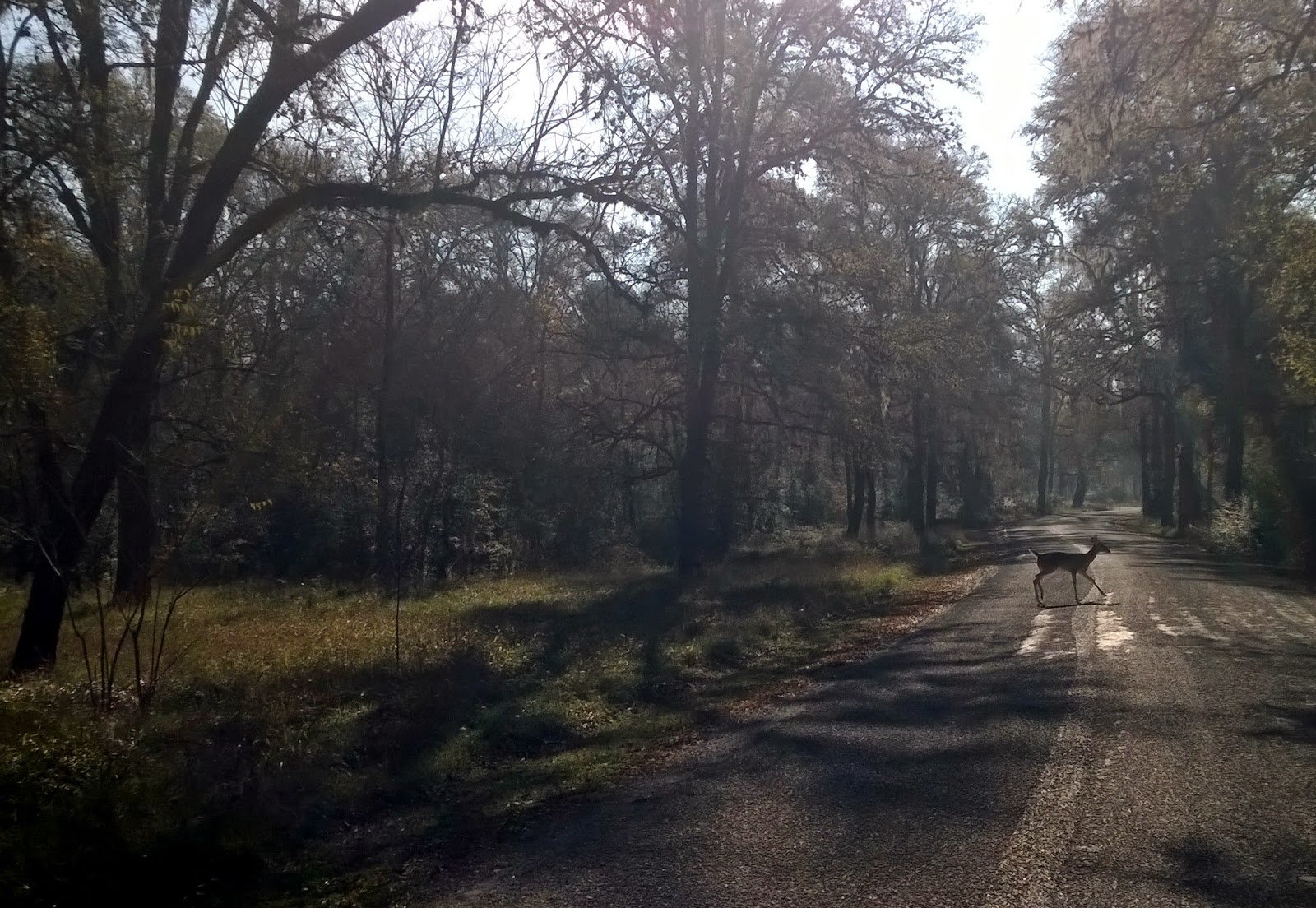 This is a road inside the park. About 6 deer had already crossed and this guy was bringing up the rear. He wasn't in any hurry and stopped to stare at me for a little bit. 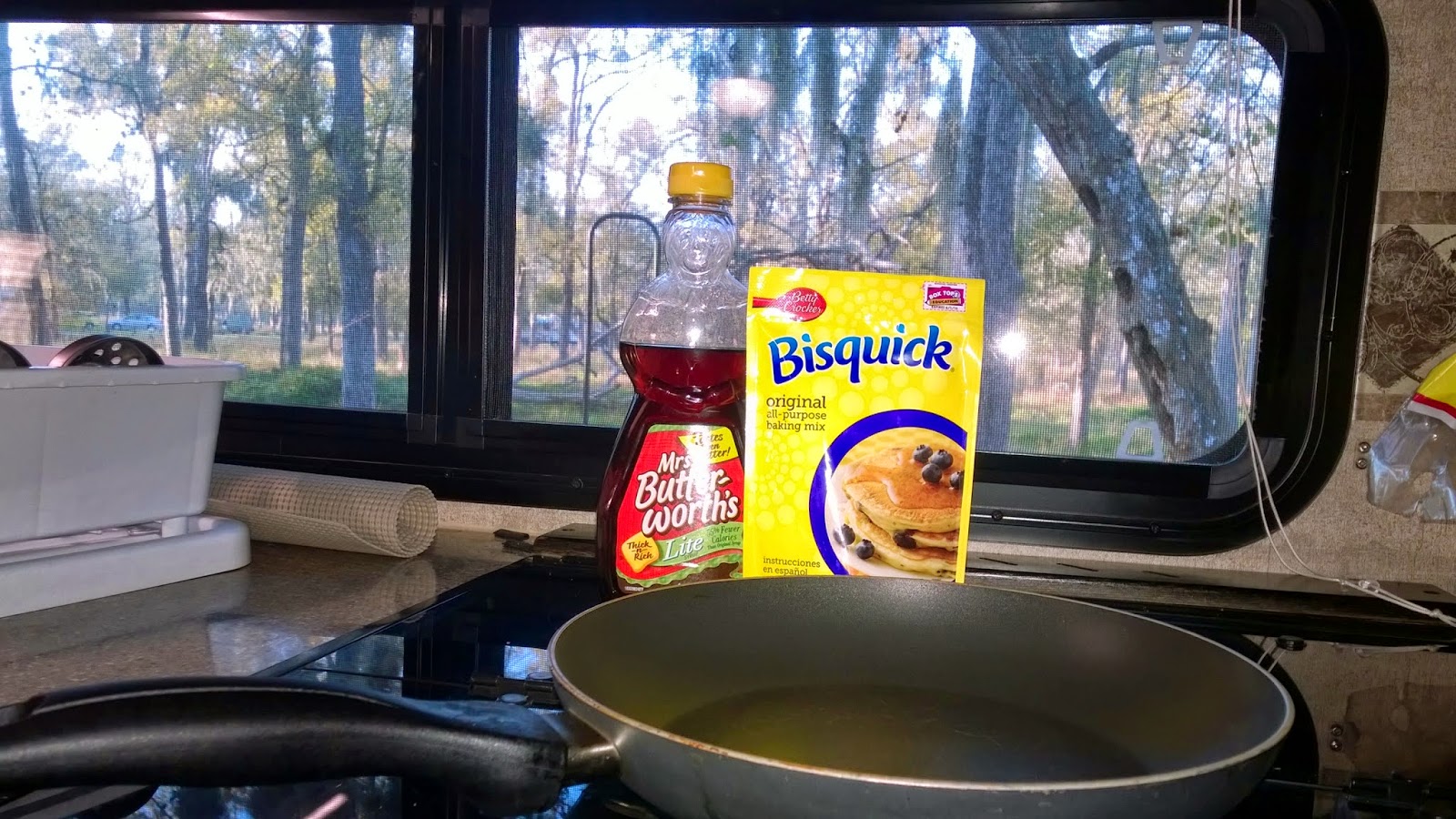 My sister made me pancakes for breakfast when I was in Lafayette a week or so ago. I had a hankering for them so I picked up some of these individual size packages of Bisquick. I guess the days of me making them from scratch is over. 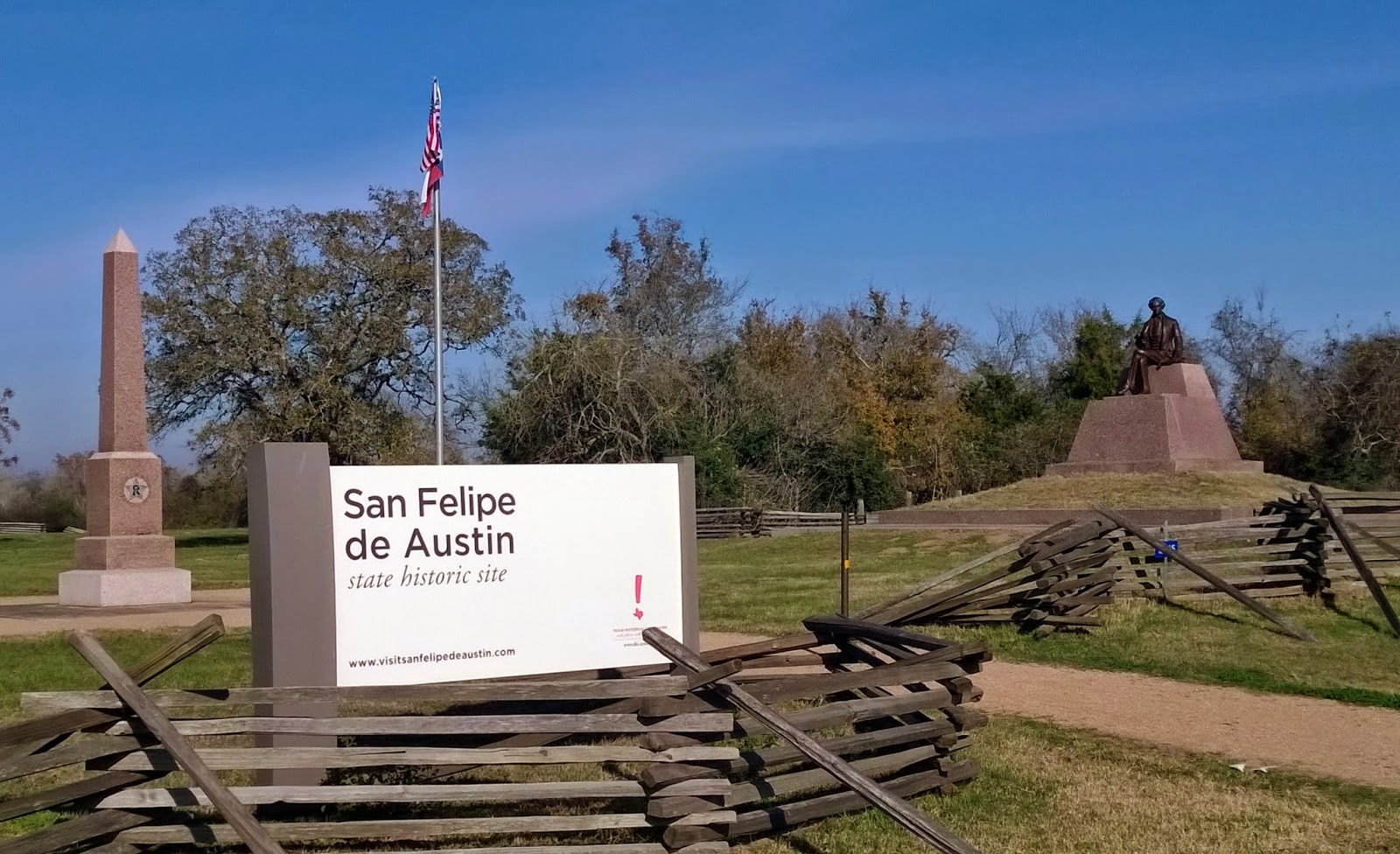 This historic site is just outside of the park. It honors Stephen F. Austin as the Father of Texas. He organized the first colony of Anglo's into what was then country held by Spain. Before he was able to move people into the area, Mexico won it's independence from Spain and Austin had to deal with them instead. The deal was made and Austin brought 300 colonists into what is now southeast Texas.

He was the leader of the colony and established their political system, laws, courts and militia. Several of the future hero's of the Texas Revolution lived in the colony. This is also the place that Jane Long moved to after leaving Bolivar Peninsula (see older post about her exploits). Austin made his home in San Felipe which is where this park is located. 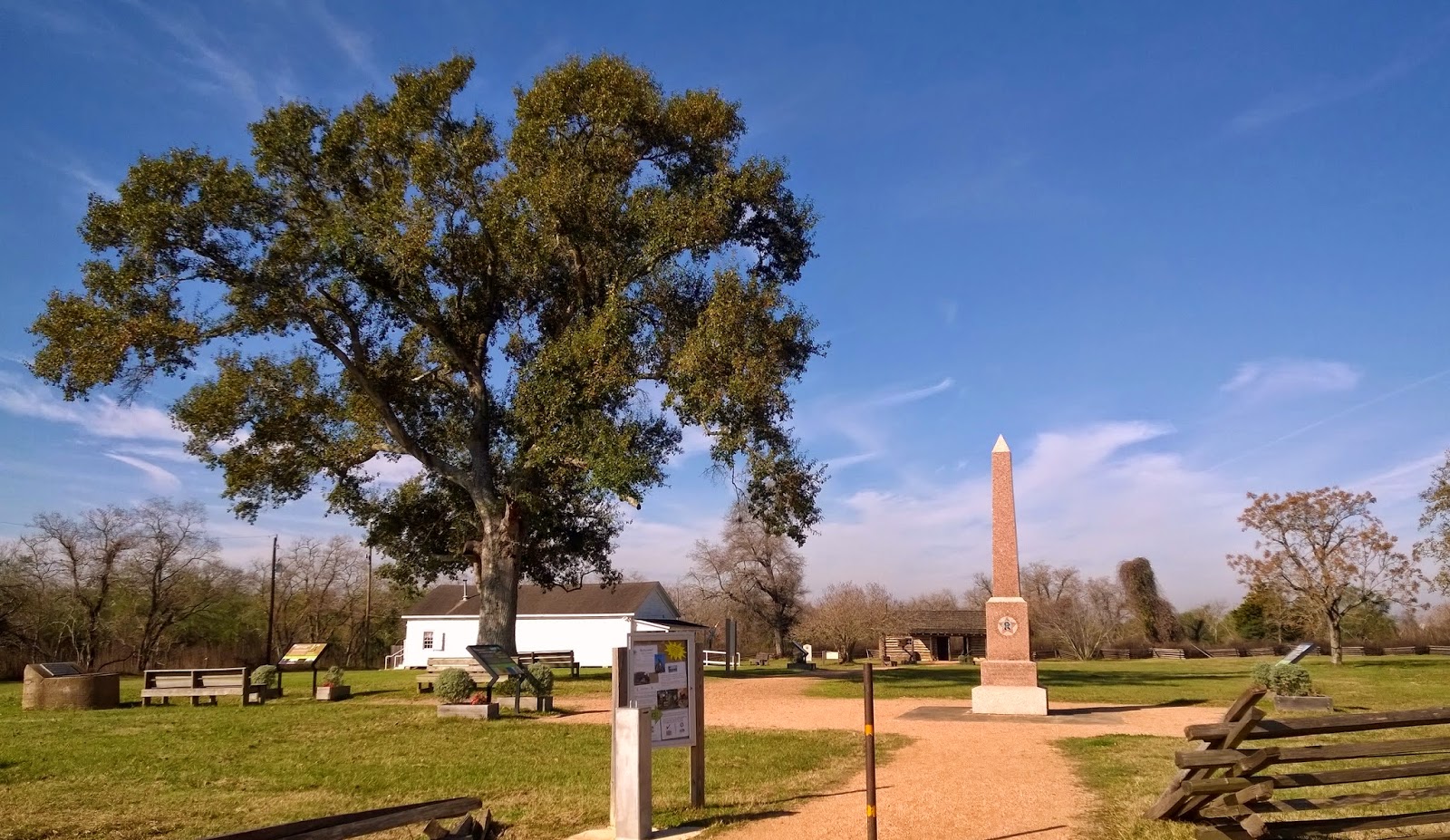 Another view of the historical site with a nice tree and obelisk. 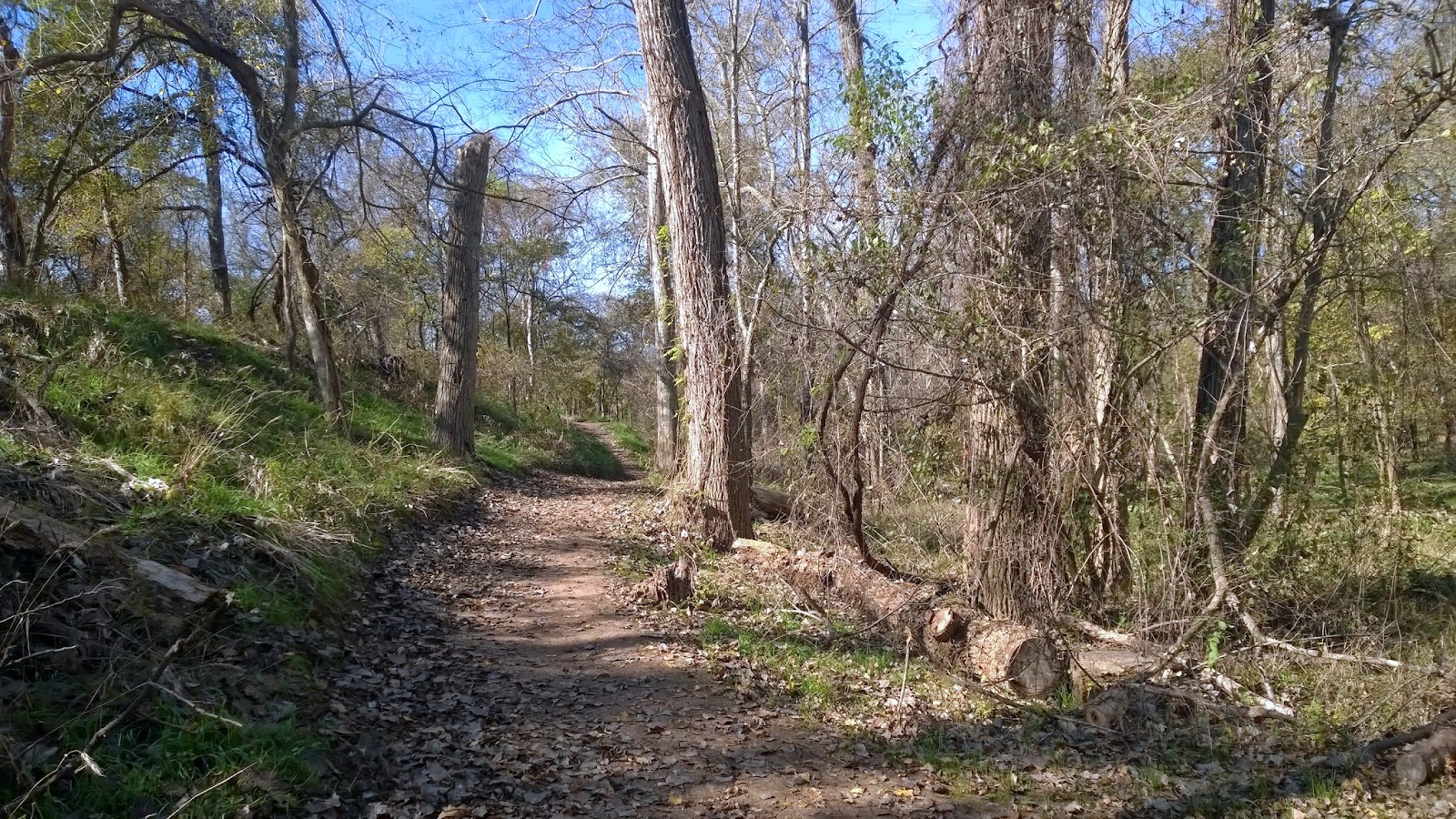 This state park has some great hiking trails. They are well defined and no one using them since the campground is almost empty. I flushed some more deer and other animals on my walk. 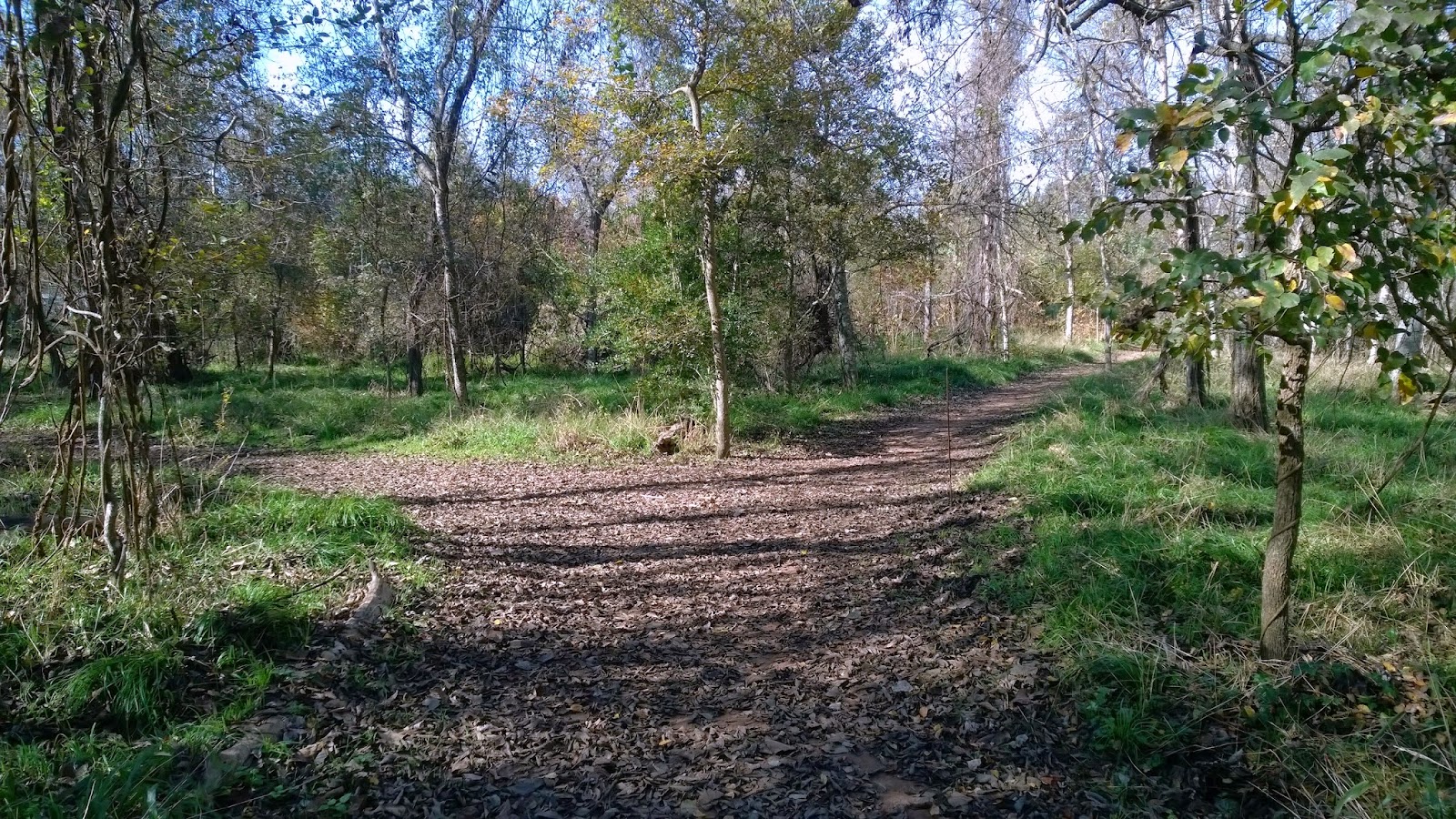 This intersection of two paths reminded me of Robert Frost's poem "The Road Not Taken". The final lines are:

Two roads diverged in a wood, and I —
I took the one less traveled by,
And that has made all the difference.

It was a nice walk. The weather was perfect with the temperature in the low to mid 60's and very low humidity. Notice I'm not using the word "hike". Hike sounds like work to me, so I just went for a walk. 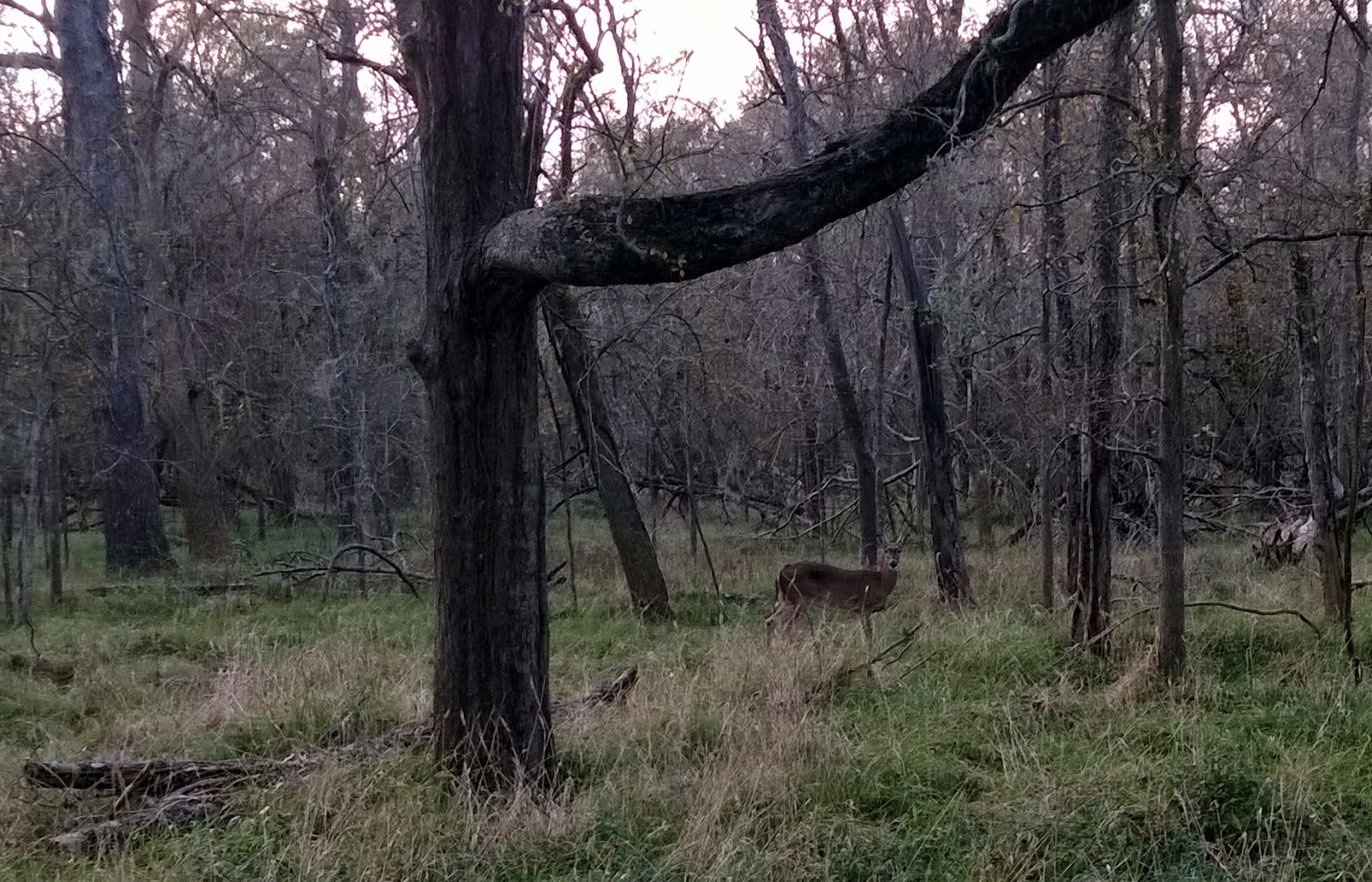 This deer posed for me on my walk. He stayed there for the entire time I was photographing him. He was still there when I walked away. I guess the deer around here have gotten used to dumb humans gawking over them. I wish I had taken my big fancy camera for a zoomed in shot, but oh well, maybe next time.

I will be leaving here on Thursday morning for McKinney Falls State Park in Austin, Texas. I will be there for 5 days and use the park to explore the capital and some of the surrounding area. After I leave McKinney I'll be heading for Blanco State Park which is located sort of in between San Antonio/Austin/Fredricksburg/Kerrville. I will be there through Christmas and leave on the 27th for some place I haven't thought of, yet.

Ya'll take care of each other. Cya down the road.