It was a short tow from Sulphur, Louisiana to Beaumont, Texas. I arrived a little after noon on Friday, the 5th. There were 3 Border Patrol cars stationed about 5 miles apart sitting in the median of I-10 in Louisiana. I can't imagine what they were doing there, but I would have thought they would be needed more at another border besides Louisiana/Texas. Geezzz.

After I set up I went to a cemetery off of Gum Slough Road near Buna, Texas. My mother would have said it was "up in the thicket". I had scheduled some work on my parents headstone and I wanted to see if it had been done yet. It hadn't, so I called the stone carvers and they said it would be done this week. I guess I'll check it out when I get back in the fall of next year.

The RV park is a little cramped but overall it is a nice one. The site was level side to side and fore and aft so no leveling blocks were needed. 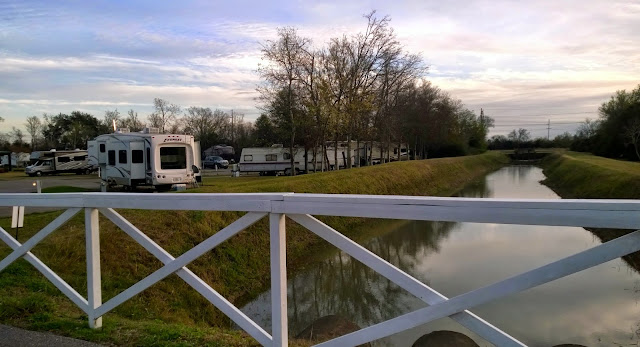 You can see Freedom and Liberty between those two RV's. This is the bridge going to the back side of the park.
I talked to the owner and he and his wife used to be fulltime RV travelers so when he built this RV park, he built it from the point of view of RV'ers. I talked to him while I did my laundry. I told him I was surprised at how cheap the machines were ($1.25 for washer, $1.00 for dryer). He said he keeps it low on purpose and it just barely pays for itself, but he was OK with it. 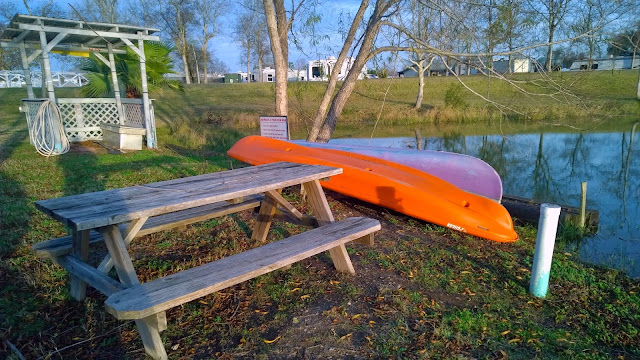 The lake is an old "borrow pit" from when I-10 was built back in the 60's. The water level stays at the same elevation year round. I thought this picture was a pretty one with the orange boat "popping". 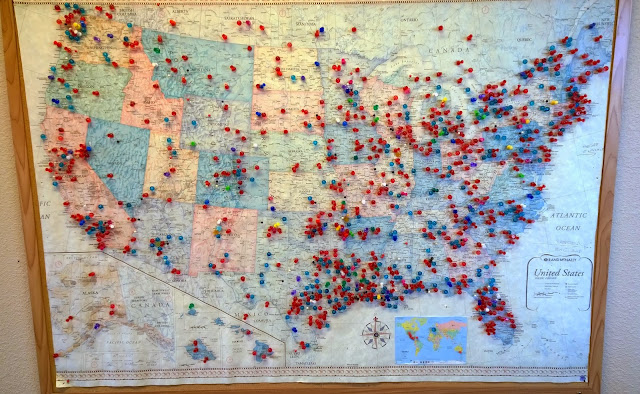 This picture is a map in the laundry room. Each pin represents the hometown of some of the people who have stayed here. There is now one on Mansfield, Louisiana. :) Every campground should have a map like this one.

I had went through part of Port Arthur, Texas when I made the loop through Holly Beach last week. This trip was on the western side of the Sabine River. The Sabine River forms part of the boundary between Louisiana and Texas and empties into the Gulf of Mexico near a town called Sabine Pass. I remember my father talking about going fishing and collecting oysters down in that area when he was a young man. I had never been there, so I took a drive. The picture above is the heavy industry located on the south-western side of Port Arthur. 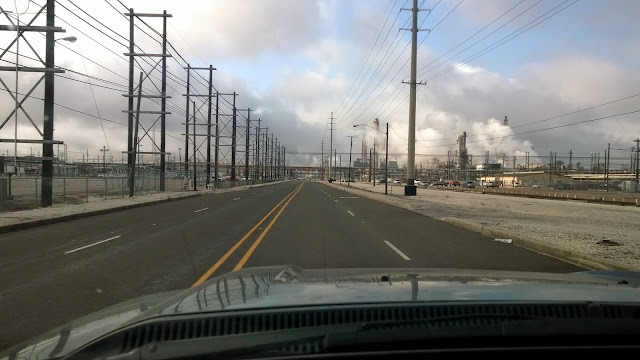 The heavy industry, refineries, goes all the way back to the early 1900's when the Spindletop oil gusher was drilled near here. That well began the oil boom for the entire gulf coast. This is a state highway going right in the middle of an old refinery. The acidly smell and fumes gave my lungs a good workout. The smell was gone within a mile of the place. 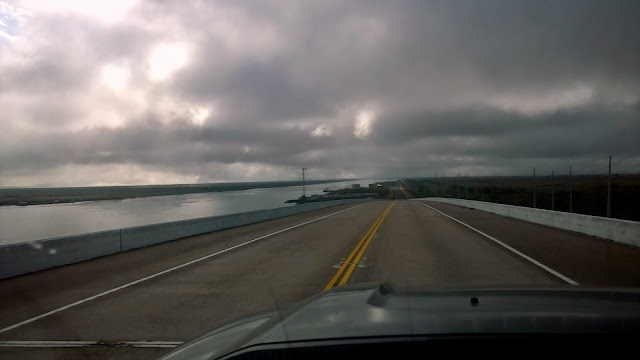 The Intercoastal Waterway Bridge headed southbound. That is the Sabine River Channel on the left. A better view from the bridge is in a later picture as I was headed northbound. 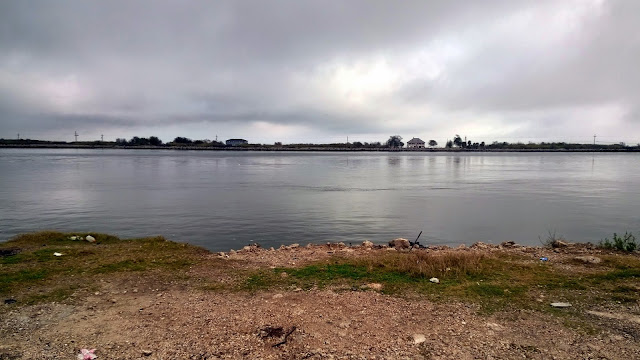 One of the few "fishing spots" alongside the road that was not occupied. The water was very calm as if it was between tides. Very little wind was blowing and the fog hung around until late morning.


This monument surprised me because I had never heard of the Battle of Sabine Pass. It honors a man named Dick Dowling and his 42 Irish soldiers. They were on the southern side of the Civil War or as some people in the south call it, The War for Southern Independence. Dowling owned several saloons in Houston before joining the southern effort. His main duty was to defend Sabine Pass from invasion by the Union. He set up his artillery pieces behind some earthen berms and "zero'ed" his cannon in to spot in the river which he marked with some stakes. The invasion came in 1863 when the union planned to invade and conquer parts of both Texas and Louisiana by sending a force of 4 gunboats and troop barges carrying 5,000 men. Dowling and his 42 men fired their cannons with deadly accuracy and sank 2 gunboats, captured 350 men and lots of supplies. The remainder of the union boats and troops "skedaddled". Dowling and his men were raised up as hero and given medals by the women of Houston. The medals were made by using Mexican gold coins which they rubbed on stones until it was smooth. It was an interesting find. 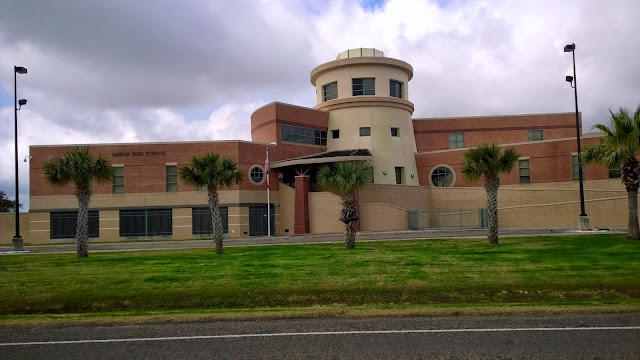 I thought this was an interesting high school building. It is in the shape of a lighthouse and home of the Sabine Pass Sharks. :)

I liked the looks of this tree on the road that leaves Sabine Pass and heads towards the beach. It parallels the beach for a while as it passes through low-lying land with cows grazing but only a few houses. The fog was just lifting in the background. 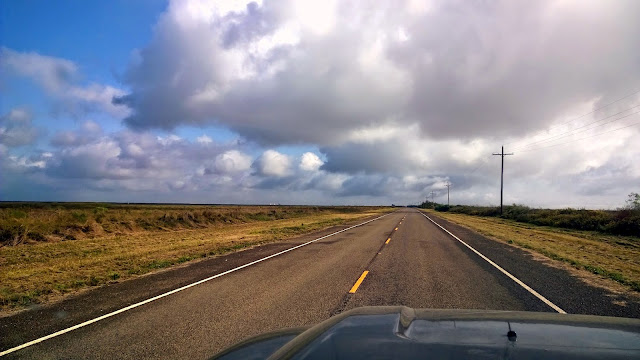 This is the same road as above but after the fog lifted. It reminded me of a song lyric on a TV show from the 60's. The lyric line was "down a long lonesome highway". 100 points to anyone that remembers the name of the TV show. It was only on the air for one year. 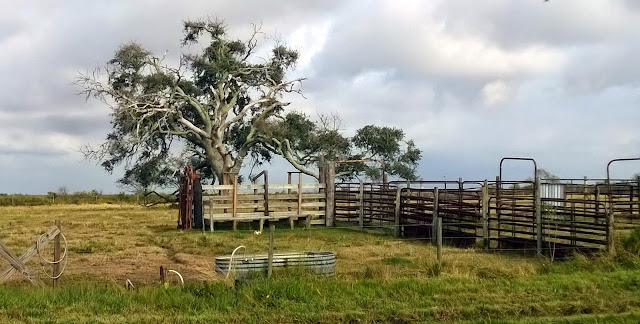 I liked this tree too. It sort of defines this area. It has been around for a while.

This is from the Sea Rim State Park. It is on the highway that used to go from Port Arthur to Galveston. Erosion wiped out sections of the road so often, they just ended the road at this state park. The Park has a few RV campsites but if you camp here, you better bring your groceries because nothing is near.

You can get on the beach inside the state park as well as just down the road. You can drive along the beach for several miles.

The posts in this pictures are there to keep people from driving past this point. You can see how calm the gulf was, it was very peaceful. 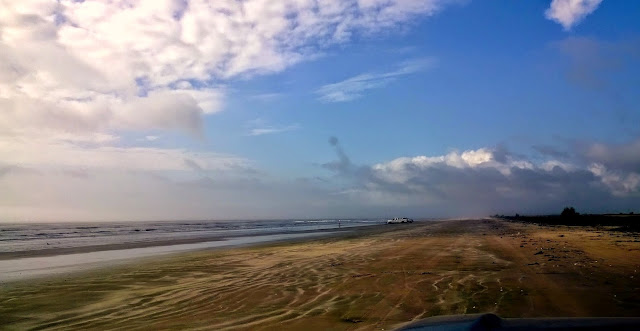 Looking up the beach as I was driving. 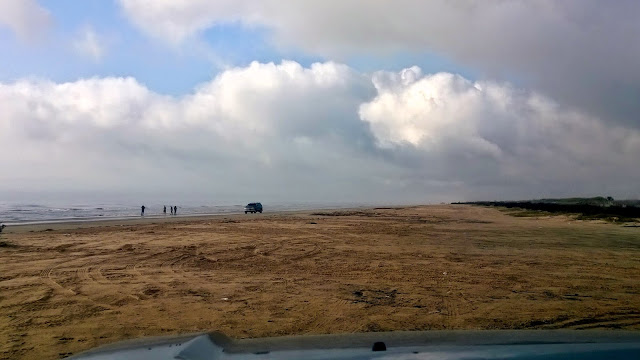 Salt water fishermen. My father used to have one of those big rods with an open face reel. 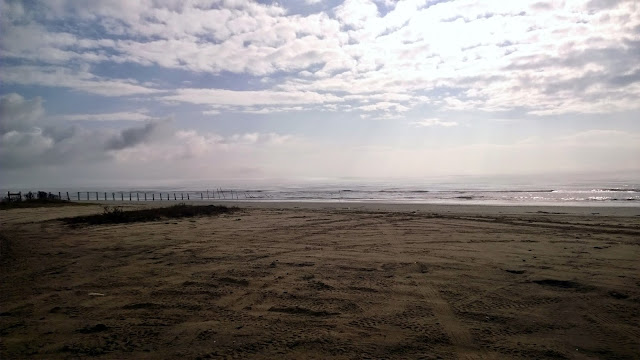 Another picture of the beach but this time with a nice sky of puffy clouds. 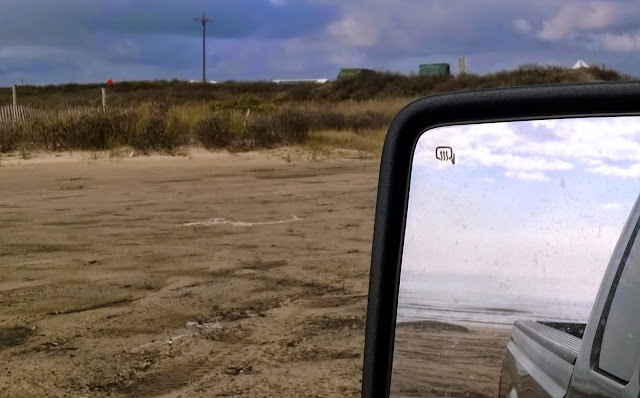 I took this one as I was leaving the beach. It symbolizes the beach being behind me for awhile. I will see it again if I make it to Padre Island. 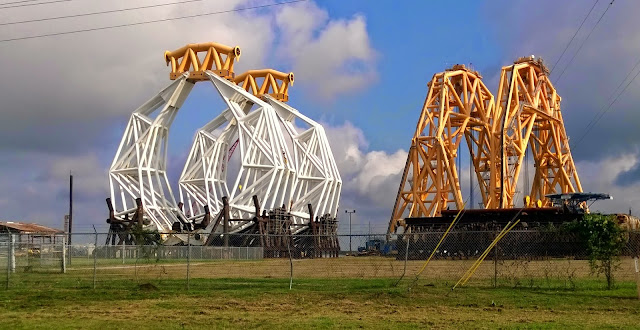 These giants are located south of the town of Sabine Pass where many oil rigs used to be located. I am pretty sure the orange things on the right are boat lifts, but I'm not sure about the whites things on the left. If anyone knows, please leave a comments as to what they are. They are kind of "alien-looking". 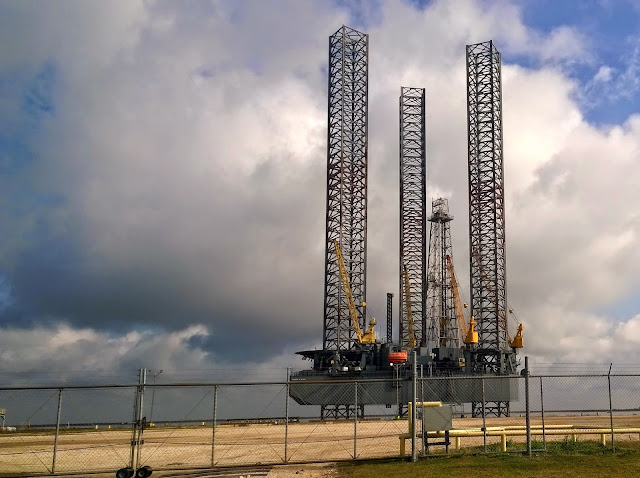 This is what the administration in Washington ran off when they placed a moratorium on off-shore drilling after the BP oil spill. I believe they took advantage of the situation to hurt the oil industry just like they have been doing to the coal industry, all in the name of climate change. Pitiful.

This is the picture from the Intercoastal Waterway bridge as I was heading northbound. This is looking to the west and you can see the tow boats and barges working. It reminded me of the Tom Sawyer campground.

Ya'll take care of each other. Cya down the road.