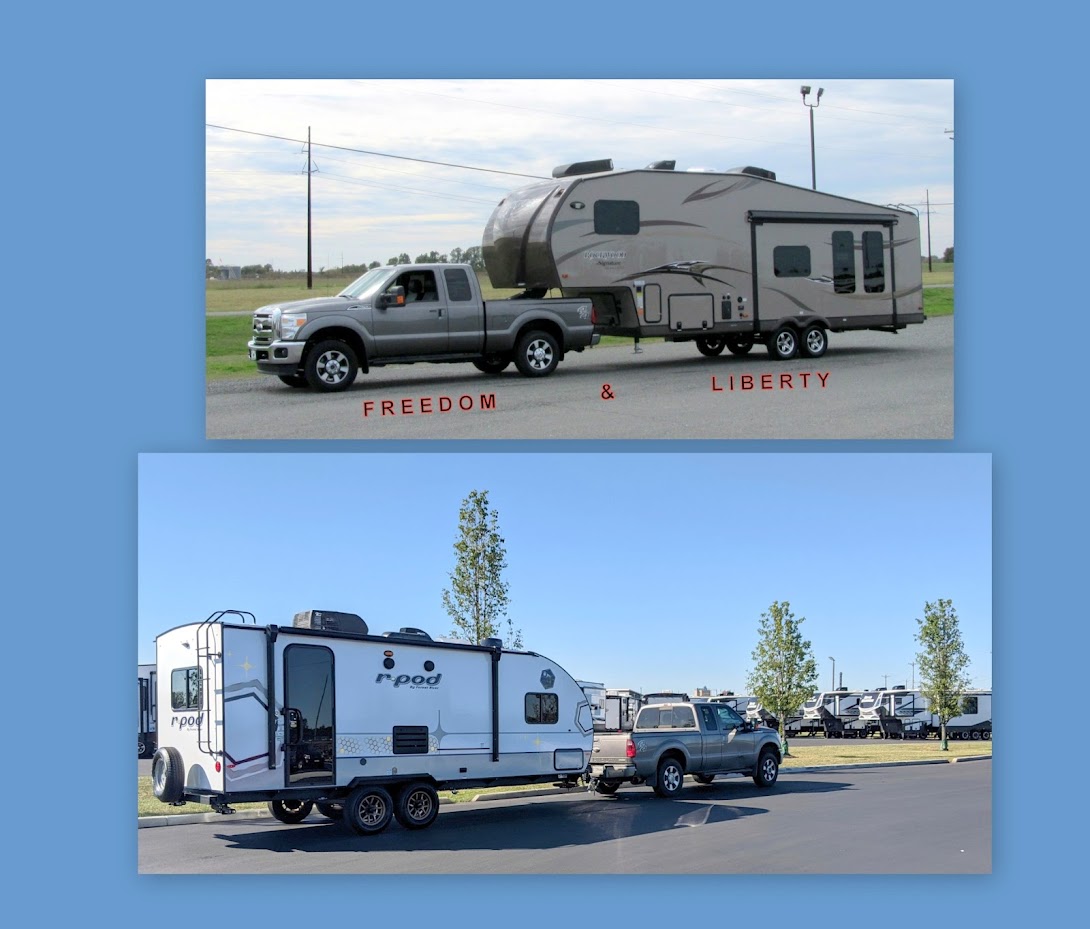 Almost back to Homebase

I'm on the last leg of the return trip from picking up Liberty2. Only about 120 miles left to go. It will be good to slow down for a couple of days cause I feel like I've been on fast-forward for a while. The trip has been productive since I've found a few things to fix and/or modify on the new RV. In RV'ing, there's always something. Yeah, I could take it to a dealer for a couple of things, but now-a-days it takes weeks, if not months, to get parts ordered and service completed. Easier and quicker to do it yourself, even if it costs a little bit. Oh well, hopefully it will keep me busy but also not prevent me from getting back on the road.

My plan (we know how those turn out) is to park Liberty2 next to Liberty so I can move out of one and into the other. Two main items needed in Liberty2 is my old mattress topper and a new recliner. Both will do wonders for my back. I figure I will either throw away or donate a lot of stuff due to downsizing. Once I'm moved out of Liberty, I hope to sell her quickly. She has been up on Facebook Marketplace for a few months with a "For Sale Soon" sign. Well, "soon" is almost here. I've been reducing the price every couple of weeks and have had a few dozen contacts with about 20 that are serious. We will see how it goes but I won't be holding on to her in hopes of getting a higher price. Someone is going to get a very good deal.

I know these past couple of posts have been sub-par, but there has been so much new stuff swirling around in my head it has been hard to focus it into a blog. And since I'm just a simple man, I'll post a couple of pictures before showering and hitting the road.

No time for proof reading. Excuse any typo's, grammer, etc.

Ya'll take care of each other. I'll CYA down the road.

I'm tired. I guess I'm out of travel shape since I've been sitting around getting fat (actually lost weight) and lazy. This post will get me caught up on the two travel days to pick up my new RV which I think I will call Liberty-2. It will also include the three days and nights at the campground after picking her up.

I packed up everything I could fit into Freedom and left Mansfield early on October 1, 2022 headed to Trenton, Ohio to pick up my new Forest River R-Pod 201. The travel distance was a little over 900 miles and since I'm older and wiser, I split the time up into two days. The first days stop was in Kattawa, Kentucky at a Day's Inn. While being bored at the motel, I started going over things in my mind that I may have forgotten to pack. Yeah, yeah, I made a list, in fact it was an electronic list on my phone. But, I couldn't remember for sure if I had packed my temperature gun to check the hub temps on the new RV. So, I found a Harbor Freight in Louisville and bought a new one on my way to the second motel. The second stop was at a Quality Inn in Carrollton, Kentucky which coincidentally is the location of the campground I'm at now. I purposely chose this motel location so I could drop by the campground to check things out before arriving with the RV. It was a good thing too. The campsite looked good, but I could see I needed more water hose since I had only brought 25 feet. One reason I chose this town and campground was due to a Walmart being close by. I headed to there to buy some more water hose. I'll be headed back there today to stock up on a few things now that I have the RV to put them in.

I picked Liberty-2 up at RV Nation and spent about an hour or so with their technician going over things. Most of the items I was already familiar with since they were the same on Liberty. Some were new like solar panel, solar controller, inverter etc. I should have asked more question of the technician but I trusted him when he said they checked out all of the systems. I've since found two things wrong. One is very little pressure in the shower. This usually means some screen blocked with bits of plastic when the factory cut holes in the tanks. I removed the hoses and showerhead but that didn't solve the problem. Liberty2 has/had a "watermiser" in the shower which recycles water back to the fresh water tank until hot water reaches the shower. For years I have been doing manual by catching the shower water in a pitcher until it gets hot then using that saved water to flush the toilet as needed. I figured there must be a screen in the showermiser but couldn't find it. I called the company and talked with a nice technician named Gus. He talked me through a few things to checked but nothing solved the problem. I tried to remove the miser but couldn't. So Gus suggested removing the faucet assembly in order to remove the miser. I didn't like that idea because if I screwed something up behind the wall, it would be a major ordeal and I would be shower-less until I fixed it. So, using all of my engineering background, I solved the problem by buying a hack saw and removing the water-miser by cutting it away. Problem solved, water pressure restored. Adapt and overcome.

The second problem is my water heater isn't working on propane. It does work great on electric so this problem is on the back burner.

I thought about taking Liberty2 back to the dealer for repairs but decided against it since it could be days to order parts, schedule work, etc. I should be able to eventually fix everything at minimal cost.

Since Liberty2 is a bumper pull, that meant a new hitch up process and equipment. Also, the back-up camera on Freedom has started working intermittently. It is probably a dirty connection on the wiring harness, but I haven't really tried to pry it loose yet. So, instead, my plan B is use the tennis balls on radio antennas to line me for hitching up. I tried it at the dealer and it worked pretty good. It will take a little more practice, but it will eventually work out.

I'm too tired to write more. I have a lot to write but not right now.