Moving Day, the Cajun Riviera and the Circle of Life

I left Duson and moved to Sulphur on Wednesday. This campground is almost full and it seems most of the campers are workers in the local area. There is a lot of industrial construction going on around here. My oldest son lives here and I stopped to say goodbye before heading out west. I also wanted to explore a route I tried to do about a year ago but I got sick and couldn't go. That route is down to the Gulf of Mexico at Holly Beach and then then over to the Port Arthur, Texas area. 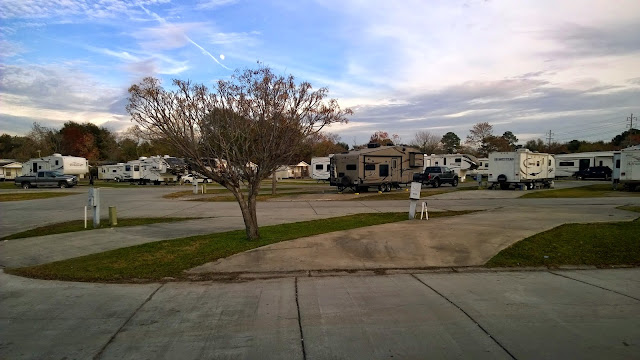 I packed a lunch because I knew there would be some nice places along the way to eat it. I made a bologna sandwich with Miracle Whip, which is the real mayonnaise, not that fake stuff. Well, it was the Lite Miracle Whip, so maybe it is a little fake. Some tator chips and a bottle of water finished the makings. It was foggy when I got up this morning so I had to wait for it to burn off. At 9:00 it was still foggy so I just decided to head on and see what would happen. The fog/haze stayed around most of the day but it made for some interesting pictures.

Holly Beach used to be called the Cajun Riviera. It is one of the few places in Louisiana with a sandy beach on the Gulf of Mexico. Although the Gulf is the southern border for Louisiana, most of the places are swampy wetlands without sandy beaches. Hurricane Rita wiped Holly Beach out in 2005. Just as it was being rebuilt, Hurricane Ike came through in 2008 and repeated what Rita had done. I was curious to see how much rebuilding had been done over the last 5 years. There are a few permanent houses but it seems a lot of people are just parking an RV on their property and leaving it there for when they come down for the weekends or vacations. That way they can haul it to safety when the next storm shows up. The beach had been eroding away for years before the storms but the two storms sped that process up. The beaches have come back pretty good and are now about 150 feet wide for several miles. It would be a nice place to spend the day.


After leaving Holly Beach I followed the beach road into Texas and saw Port Arthur. The last time I was there, I was being born. Yep, Port Arthur was my birthtown but I don't ever remember ever being there. I drove by the hospital today and parked in a lot across the street. I was picturing my mother (29 years old) and father (32 years old) leaving the hospital with their third child. And here I am, almost 59 years later showing up to see what I can see. There are many life circles, I guess this was one for me.


Tomorrow will be moving day again. I'll be heading to Beaumont, Texas.

Ya'll take care of each other. Cya down the road.
Posted by Darrell at 10:17 PM