Another Corps of Engineers campground. If I could, I would stay in them all the time while on the road. This campsite is electric only with a view of Saylorville Lake for $11.00 per night with the Senior Pass. When making reservations, I decided to change changes up and camp here for four day instead the usual three. I figured I may need the rest and to let time catch up. Thinking back to the first campground near Little Rock seems a very long time ago, but it's only been a little over two weeks. I've experienced this phenomenon every since I first started RV traveling. I think it is associated with me changing campground so often. I do that intentionally so I'll always be seeing new things. For example, I camped at this campground a few years ago but have seen all new things this time. When I'm stationary in a campground like I was last year, the days blur into weeks then months. Next thing you know, it's been a year. Some people call that being in a rut I guess. I was lucky when I was working that my job was never the same from day to day. Now, I have to create my own "new-ness" to each day.


I went exploring downtown Des Moines today. I had heard about a park full of statues. I have seen places like this twice in my travels. The first time was in Wausau, Wisconsin and the largest and best so far was in Loveland, Colorado. The first one I stumbled upon, the second one I searched for and found it. This one in Des Moines I found during research. It is not as good as the others, but it was still nice. The weather was perfect for the walking among the statues. I don't have any information about each one. The statue garden in Loveland had plaques that gave information about the statues which was good. So, not every picture will have captions. 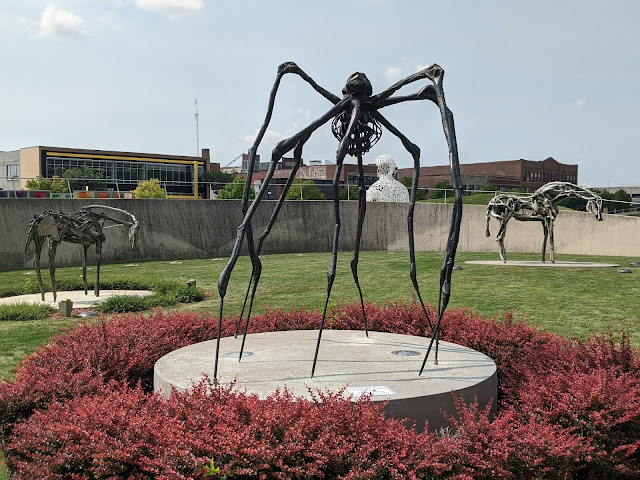 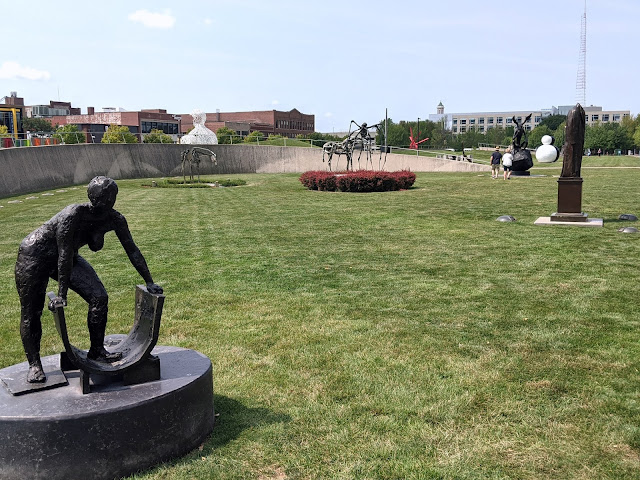 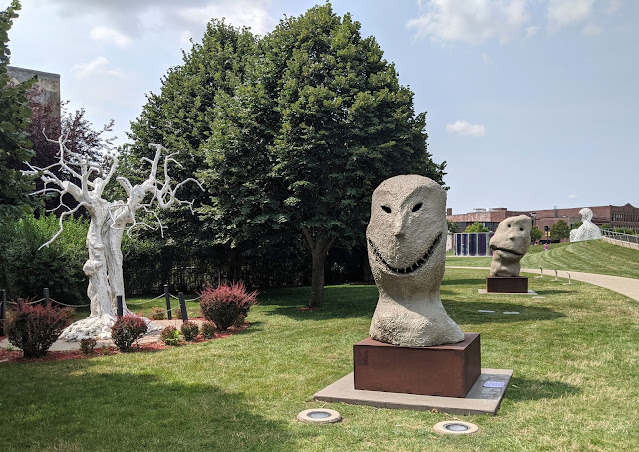 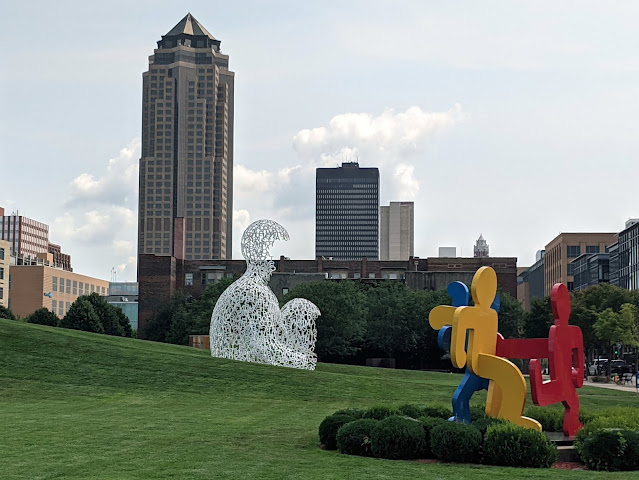 Liberty is coming up on her eighth birthday this year. I think she has held up pretty good considering she has been towed nearly 50,000 miles on some very rough roads. But, things are going to happen when traveling and you have to adapt and overcome. Something happened after filling up her fresh water tanks at this campground. I filled up her tank at the potable water station near the campground entrance. After setting up in the campsite, I notice fresh water dripping from her underbelly. There isn't anything in that area and that has never happened before. There are four connections to the fresh water tank. They are, the gravity fill, the vent, the drain and the outlet to the water pump. Today is day three and it is down to a drip every several minutes. I think the water is still coming from the initial source that ponded on the coraplast underbelly covering. The fresh water tank isn't leaking or else it would have drained out by now and the amount of water dripping from under Liberty would be a constant flow. It hasn't. The flow rate has steadily decrease since day one. I bought a scope and tried to see under the coraplast covering but couldn't see anything useful. I thought maybe her water heater had a leak but she is still creating hot water. If it had a leak, the water level would have dropped enough to expose the heating element which would have burned out once exposed. So the water heater is good. It shouldn't be a leak from a water line because the lines were not under pressure at the time the leaking started because the pump had not been turned on which would have pressurized the lines.

My best guess is my gravity fill line or vent line has a leak. This would explain why the rate of flow has reduced over the three day. After using water, the level in the tank has dropped below the point where those two line enter the tank. The only way to confirm this and replace the lines is to cut into sections of the coraplast underbelly. This can be done without a problem but I don't want to do it unless absolutely necessary. So, I'll wait and see if the problem repeats itself at the next campground. Traveling down the road should get rid of any residual water in the underbelly. We will see how it all works out.

It's a small price to pay for the freedom of traveling.

Thursday is moving day and I'll be going to a state park on the Iowa/Nebraska border. It will be another campground that I'll be revisiting. Before I leave Des Moines, I'll pick up a few steaks to take with me. There is a grocery store here named, HyVee that has the greatest steaks I've tasted in a very, very long time. The store is similar to H.E.B.'s in Texas.