Another great COE campground. Ten dollars a night for electric only. It is a smaller campground with lots of local group campers. The average age of the campers is probably late 60's to early 70's.

This area is composed of many towns on each side of the Mississippi River. Davenport, Iowa is the largest and better developed of them all so that's why I listed it in the location. I came here to see a few things and a couple things jumped up and surprised me. I guess I didn't do enough research. There will be a lot of pictures with this post and the captions will tell most of the story.

The main attraction for me was the Rock Island Arsenal. I have heard about this place since I was in the Navy back in the 70's, so I wanted to see it. It is a military base with tight security. To get on base you have to submit your ID at the "Visitor Control Center" and if you pass their background check, which includes facial recognition, they will issue you a pass that is valid for one year. I've been striking out with museums that are closed. The one on base was closed the day I was there. Everything happens for a reason, so I must not have been meant to be there. The strange thing is the Mississippi River Visitor Center is located on base. It's a nice little visitor center overlooking Lock and Dam #15.

One of the nice surprises for me was the double-decker bridge shown in the picture of the lock. I didn't know about it and just stumbled on it. It's equally impressive as the dam. The bridge was built in 1895. It's name is Government Bridge because it is owned and maintained by the Federal Government. A 125 year old bridge that is still standing and functioning like the day it was opened. Wow. It was the third bridge that spanned the river from Rock Island. The first was famous too. It was opened to traffic in 1856 and was the first Railroad bridge to span the Mississippi River. That was just one of the things that made it famous. The other was it was hit by a steamboat not long after its opening. Of course, the steamboat organization sued the railroad organization for damages since they built a bridge over their river. One of the lawyers representing the railroads was a young Abraham Lincoln. The law suit when all the way to the U.S. Supreme Court that ruled the railroads and steamboats had equal rights to the river but must accommodate each other. Sort of "split the baby" kind of ruling. Other interesting things about the Rock Island area back then. The Secretary of War during the law suit tried to kick the railroad off government property because he wanted the railroad to cross the Mississippi River in the southern part of the country. His name was Jefferson Davis, future President of the Confederate States of America. Politics are always in play. Twenty years before the bridge was built, the young Army officer in charge of surveying the Rock Island Rapids and looking for a safe way for steamboats to pass them was none other than Robert E. Lee. It seems everyone of importance during that era were somehow in the Davenport/Rock Island area.


As I was driving across the Rock Island Arsenal base I stopped and payed my respects to the people buried at the Rock Island National Cemetery. I knew about this cemetery and was on my list to see. 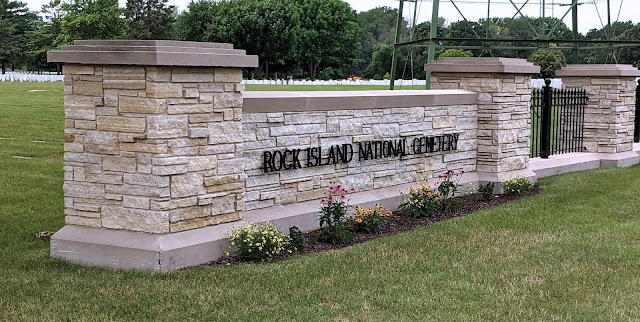 After leaving the National Cemetery, I saw a group of headstones located in a separate part of the island. I went back to see why they were separated from the rest of the graves. The reason? They were confederate graves. That didn't make any sense though because I was pretty sure there weren't any Civil War battles fought in northern Illinois and Iowa. And there were a lot of headstones. After doing some research it made sense. These were the graves of POW's. In the summer of 1863, the North and South decided not to exchange prisoners anymore. Well, that created a problem for the North because they didn't have enough prisons to hold all the Southern prisoners. So the Army created a POW camp on Rock Island. The first prisoners reported to the base in December of 1863. During the first three months, hundreds and hundreds died from exposure to the winter, pneumonia and smallpox. When the North built the POW camp, they didn't build a hospital. Remember, there was a smallpox vaccine even back then but it wasn't available to the prisoners. Over the next two years, before the war ended, 1900 Confederates died in the camp. Some remains were relocated by family members later on, but 1,100 were left behind.

I took a riverboat ride to see the area from the river point of view. For $16.00, it was worth it. These are some of the pictures from that trip.


I visited a very large farmers market at the riverfront in downtown Davenport. There was a lot of stuff there. I picked up some banana nut bread and zucchini bread. I started to get a pint of cherries but opted instead to get the cherries in the form of a pie. I bought the pie from woman who was part of the Amish-like group. I didn't ask what group she was part of because that may have been offensive. Along with the pie she included a copy of a page from her journal. It talked about what work was done on the farm and a family fishing trip, etc. It was nice. The pie was so-so. I didn't like the crust but the inside was good. I didn't take a single picture because I was too busy looking at all the products and of course, people watching.

This stop has been a good one and I'm not sure I saw everything I needed to see. But, that is what draws me back to some places. Tomorrow is moving day and I'll be headed to another Corps of Engineer campground near Des Moines, Iowa. I've stayed there before and know the campground is super nice. The weather has made a dramatic change for the better. The highs for the last two days has been upper 70's. The lows, in the mid to upper 60's. I hope it continues but know it probably won't.