The Mother of Texas, Fort Travis and assorted pictures

I am still on the Bolivar Peninsula just across the bay from Galveston. The peninsula is a very laid back and easy going place. Nobody is in a big hurry here and people actually stop to talk to strangers in the grocery store. You can park on the beach and walk until you can't walk anymore. Remember teh rule to turn around before you give out entirely. But even if you go too far, you can sit and rest as long as you need before continuing back to your vehicle. There is no rushing here. A nice ride across the ferry and your in Galveston where you can casually walk on the beach or find a place to sit and watch the people go by and the waves come in. You can take a slow drive along the seawall with the windows down and the breeze blowing the scent of the gulf through the truck. As you pass each restaurant you get a smell of their specialty, steak in one place, BBQ in another, spicy Cajun mixed in between. It is a peaceful place, especially in the early morning or late evening. I will miss this place and I guess that is why I always come back to it.

Today I went to Fort Travis Seashore Park. It is on the tip of the peninsula right before the ferry. In the late 1700's the Spanish built a very simple fort made up of most dirtwork. It was used to defend against the aggressive Indians in the area called the Karawanka. The Spanish didn't stay long due to other happenings with their country. Around 1820 a man named James Long showed up on the peninsula with a young bride and several "adventurers" looking to fight the Mexicans in an attempt to take what would eventually become Texas. The Mexicans had just won their independence from Spain and was not itching for a fight. James Long built a fort and made new plans to take on the Mexicans. The pirate Jean Lafitte was staying on Galveston Island during that time and Mr. Long approached him about aiding in a fight against the Mexicans. Lafitte refused because he was sitting on the fence between the U.S., Spain, Mexico and the French. He did not want to take sides because that would affect his privateering deals with those countries. James Long had no choice but to travel inland in search of other people that believed in his goal of taking the land from Mexico. He left a small band of men behind to man the fort along with his young wife and child. This was in September of 1821. His wife's name was Jane and she had already had a tough life with more to come. She was born in 1798 in Maryland to a family that taught her about the finer things in life. The first hard knock came where both of her parents died when she was 14. She met James Long, who was a doctor, when she was 16 and they married when she was 17. When she was 23 she was living in a small fort on the tip of a peninsula in what is now Texas with one child and pregnant with another. Yep, her husband left her behind as he went in search of a fight. He and the majority of the men left in September of 1821 and wouldn't you know it, that winter was the worse one in a long time. The food ran out, the men that Mr. Long left behind ran off, the Karawanka Indians were still mean as a snake, there were Pirates just 20 miles away on Galveston Island and she is about to deliver another child. To keep the Indians and Pirates at bay, Jane fires a canon every morning to let them know the fort is still manned. Her husband took the red flag that he flew over the fort when he left, so every morning along with the canon firing, she runs her red petticoats up the flagpole in an attempt to fool the enemy. The one female "servant" of Jane's got extremely sick and couldn't help Jane with her delivery, so Jane delivered the baby herself in the middle of a cold winter. That baby is one of the first babies born in Texas to an English-speaking mother. Many people tried to talk her into leaving the fort and going to a civilized place. She refused to go anywhere because she believed her husband would be returning. (I guess in her mind she was going to have his dinner ready and warming on the back of the stove as if he was getting in late from work or something.). Finally in the spring of 1813, after a long winter, she is informed that her husband has been killed and she is now a widow at the ripe old age of 24. She stayed around Texas and was influential in several aspects of the new state. It was said she was courted by the likes of Ben Milam, Sam Houston, M. B. Lamar, Jean Lafitte and William Travis. She rejected all proposals and stayed a widow to her first and only love of her life, Mr. James Long. She died December 30, 1880 at the age of 82. Due to everything she did for the state of Texas and giving birth to one of the first English babies in the state, she is referred to as the Mother of Texas. Her portrait hangs in the State Capital Library in Austin. The main road that runs the length of the Bolivar Peninsula is named in her honor as the Jane Long Memorial Highway.

Fort Travis was manned at different times after Jane abandoned it. It was manned by the Texans during their Revolutionary War, the confederates during the War for Southern Independence, the United States during both World Wars. After World War II it was declared excess and sold to the highest bidder. It is now owned by Galveston County.

Today is moving day and I'll be heading to a small state park near the town of Lumberton, Texas. I have a few things to take care of in the town of Silsbee which is about 15 miles from the state park. I'll be there for 2 nights before moving again to somewhere.

The following are some of the pictures from Fort Travis and some others from around this area. 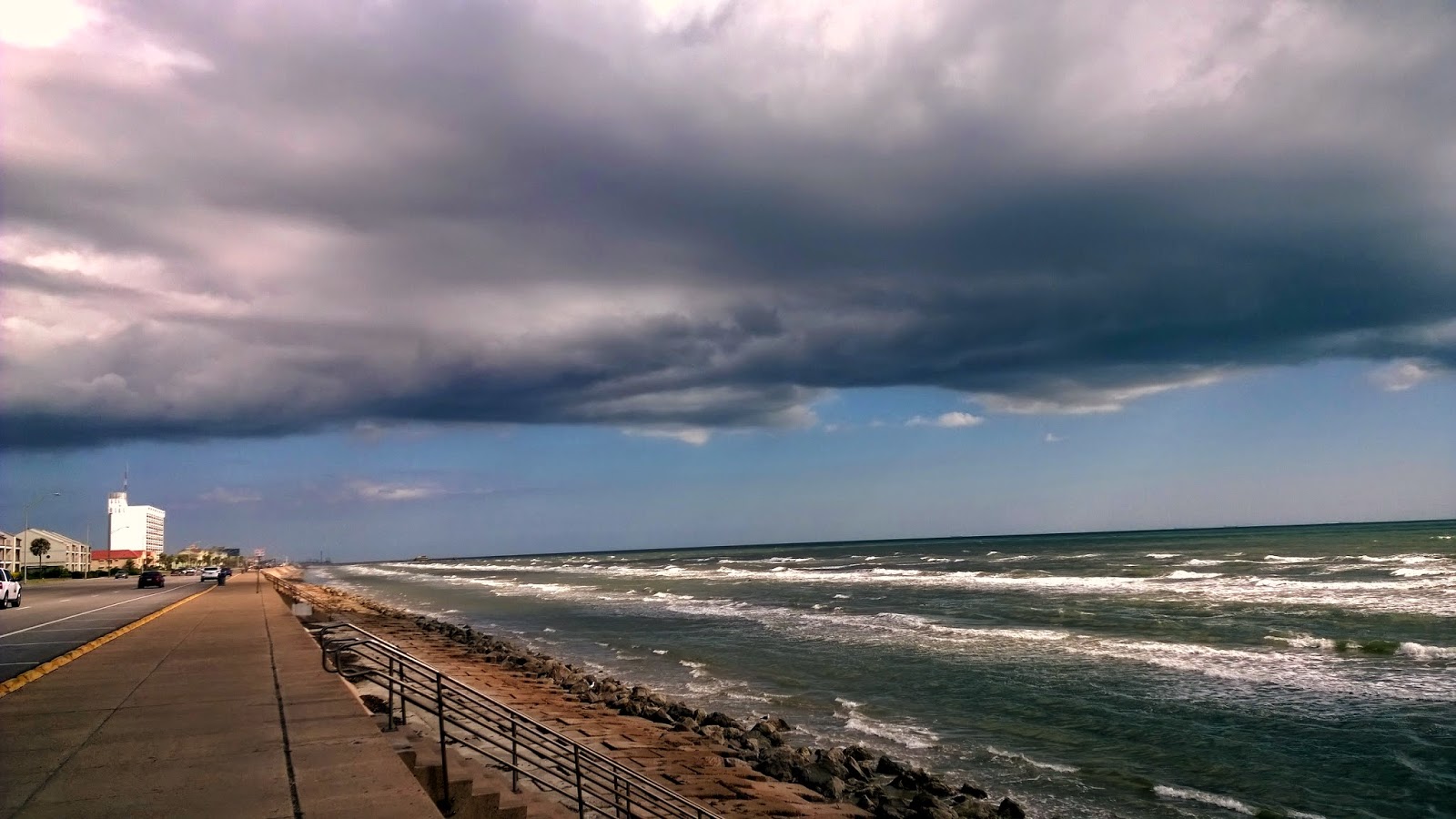 This is a picture of the seawall, cruising street and a storm rolling in. This is a good time to be here, the weather is great and not many people. 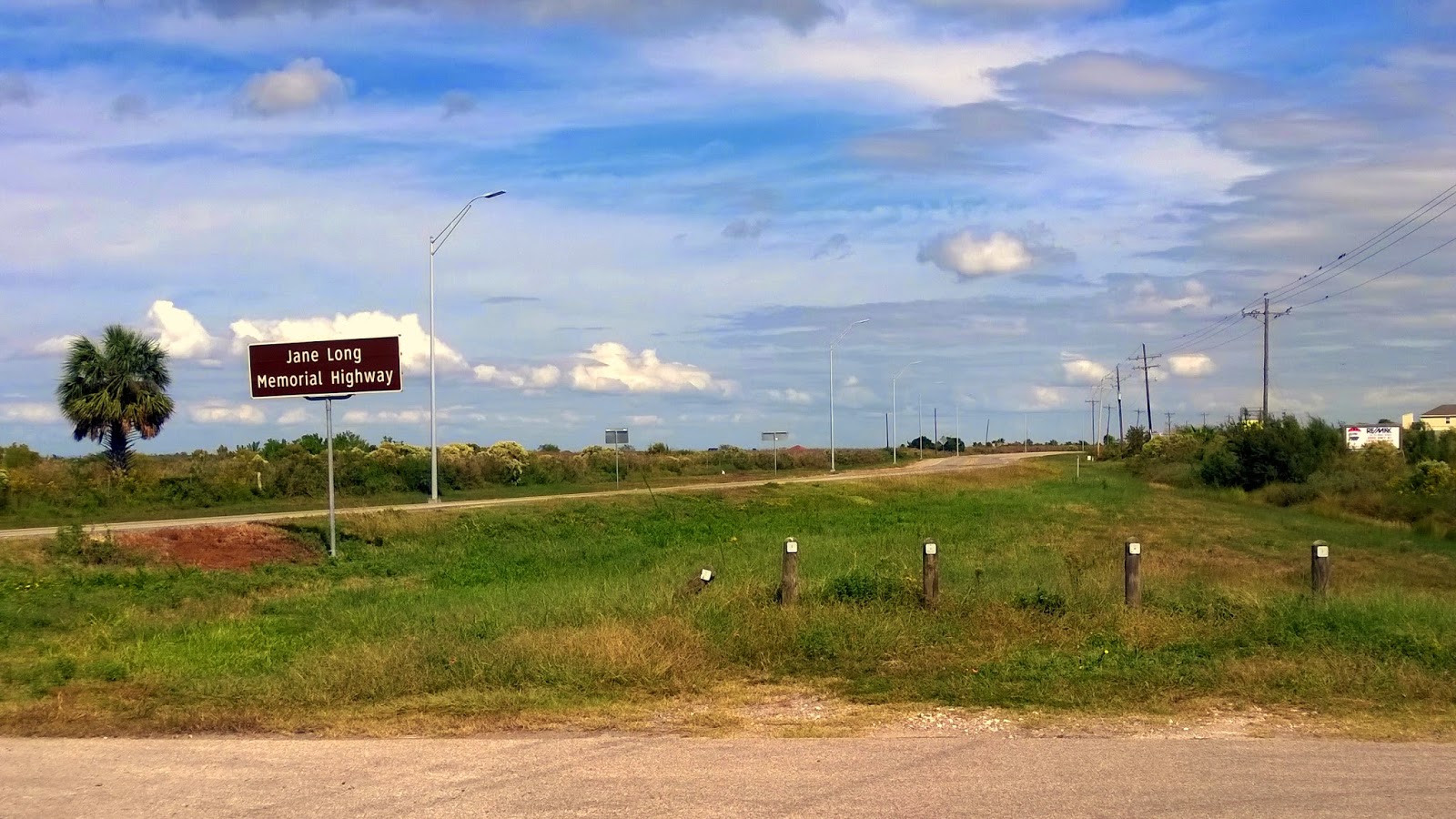 The Jane Long memorial highway. I think she deserves recognition. 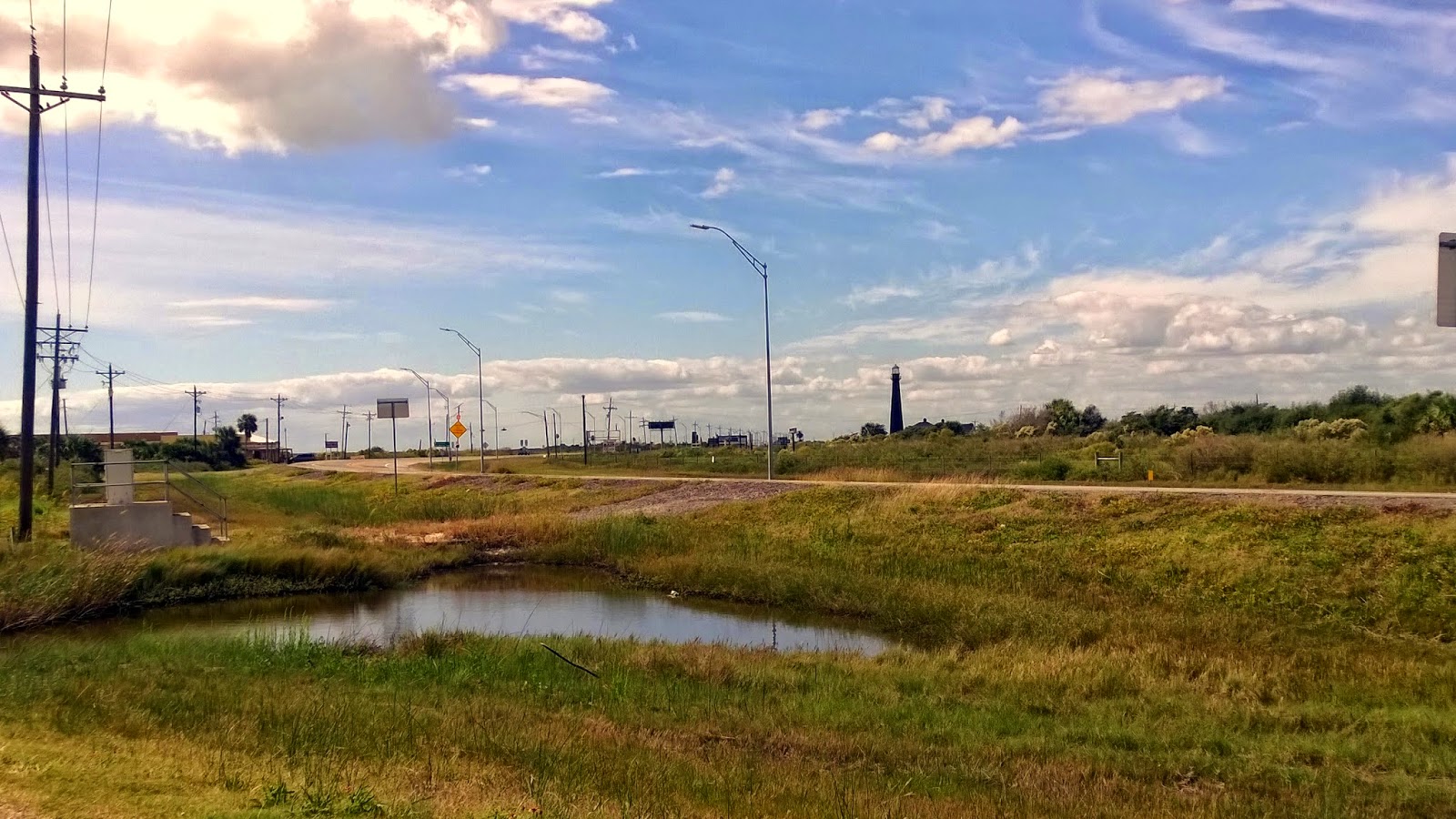 A look towards the ferry with the Bolivar Lighthouse in view 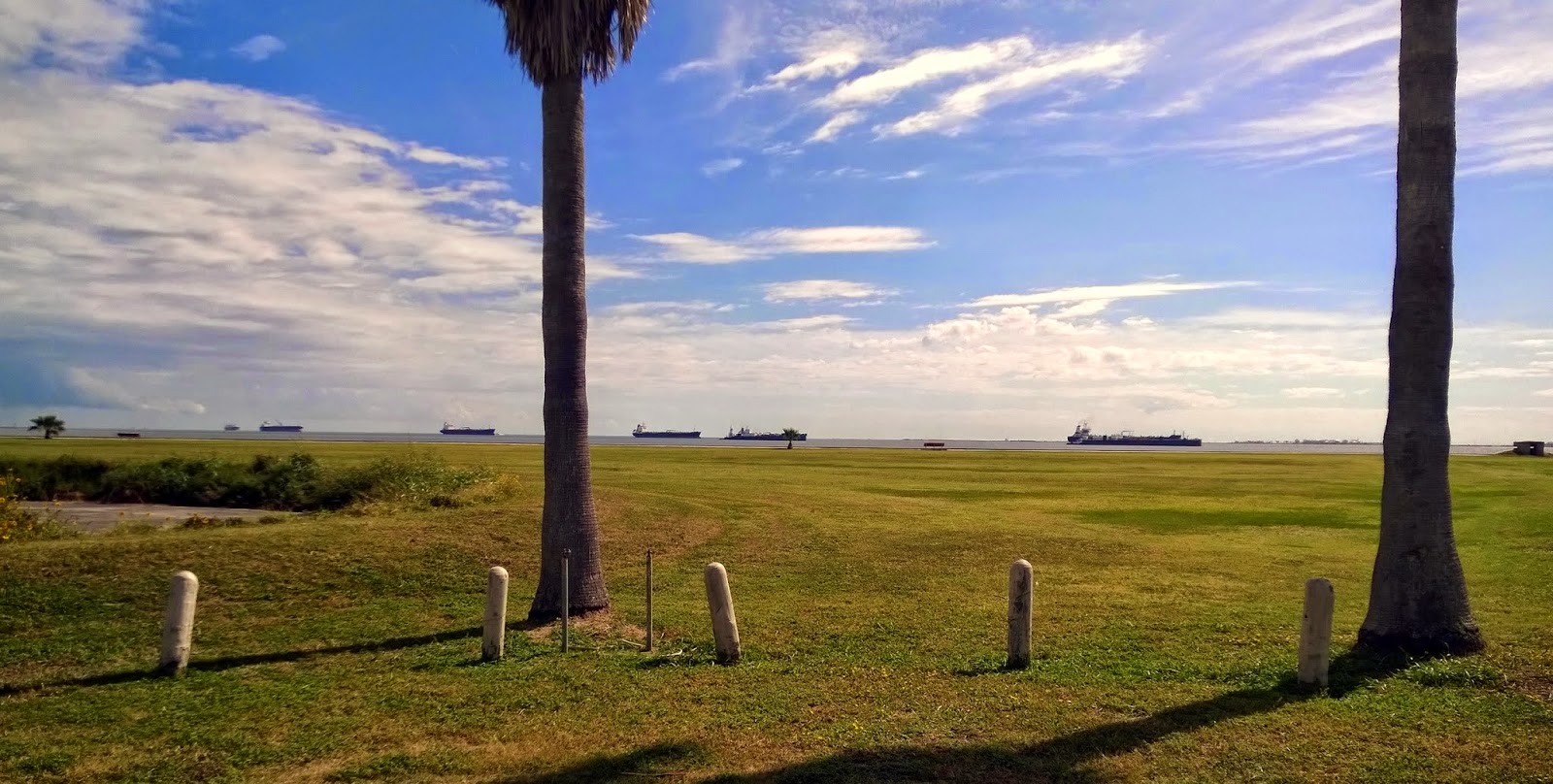 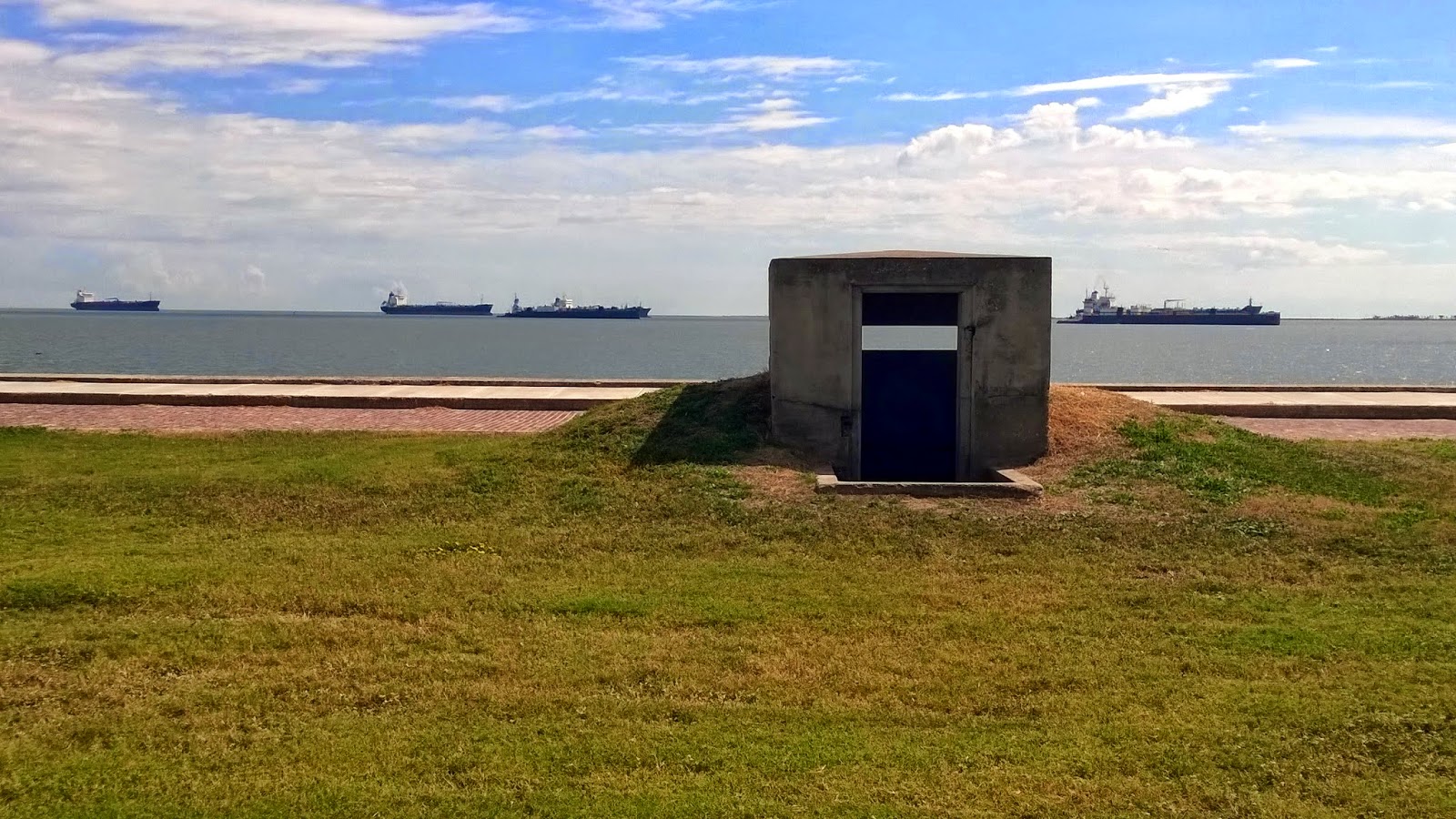 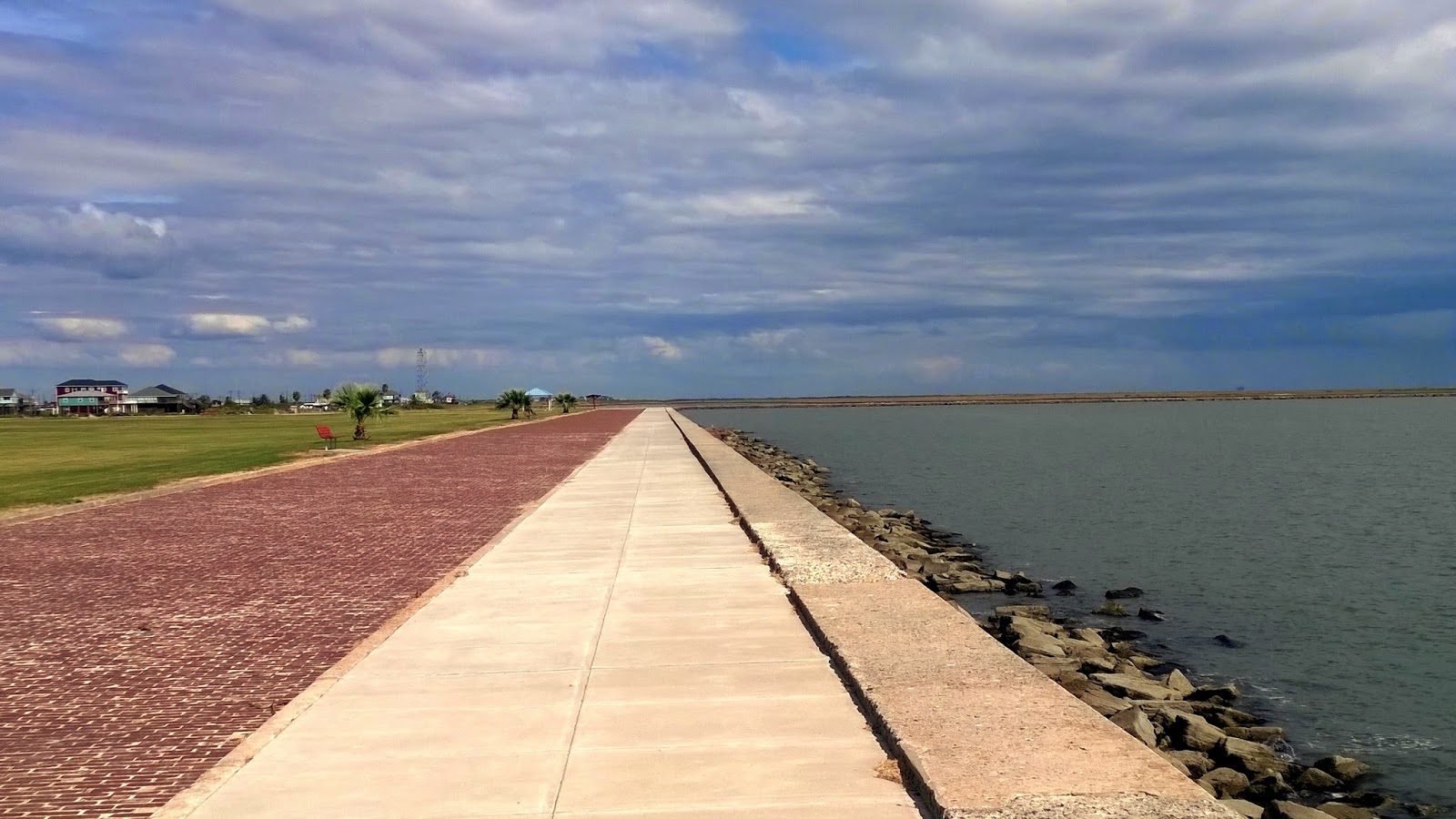 The seawall that was built to project Fort Travis from storms. The concrete on the right dates back to the period after the big storm of 1900 that wiped out most of Galveston. 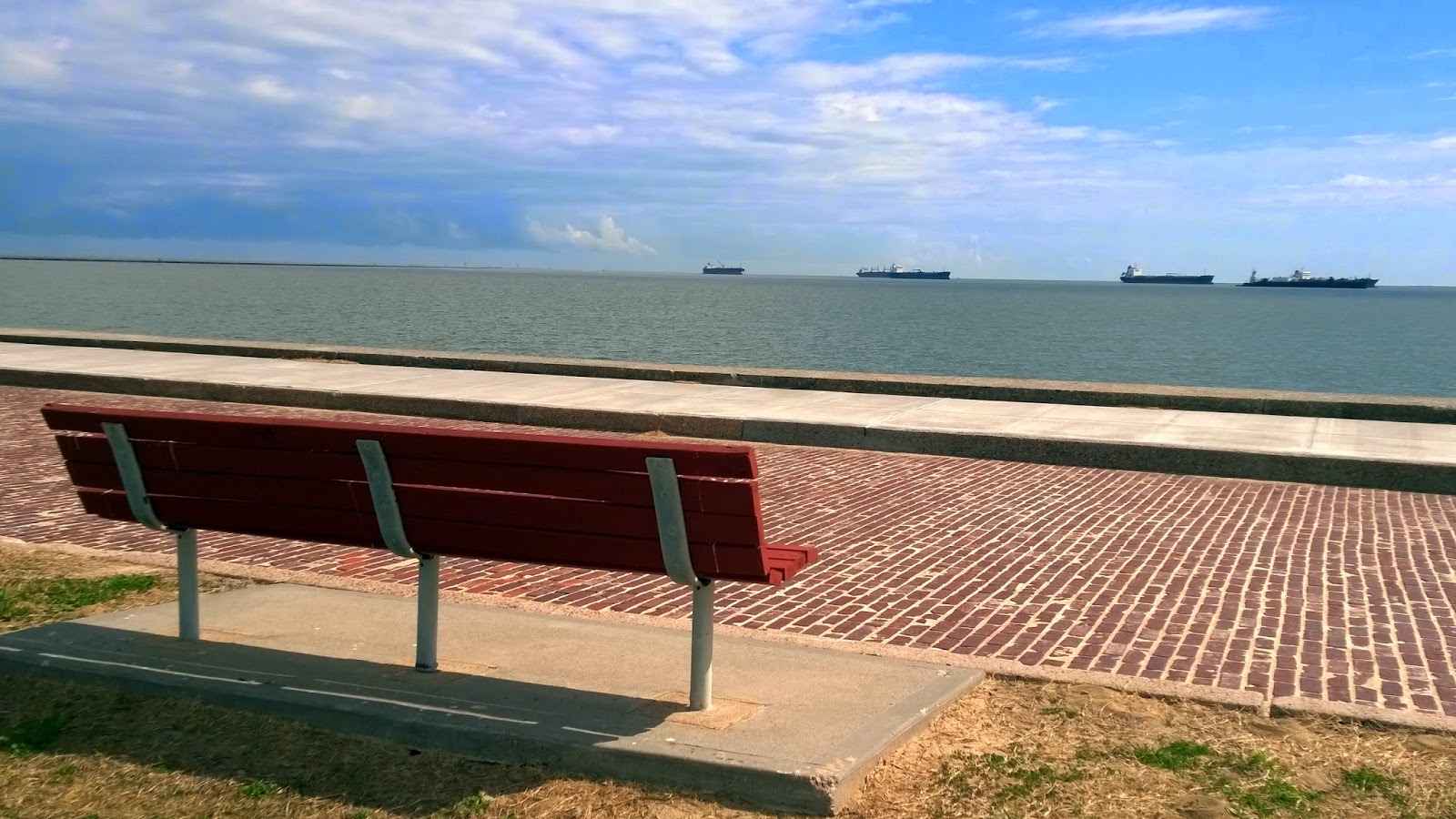 I even found a bench to sit and watch the parade of ships go by. From the bench looking along the seawall/walking area. Notice the lack of people :) 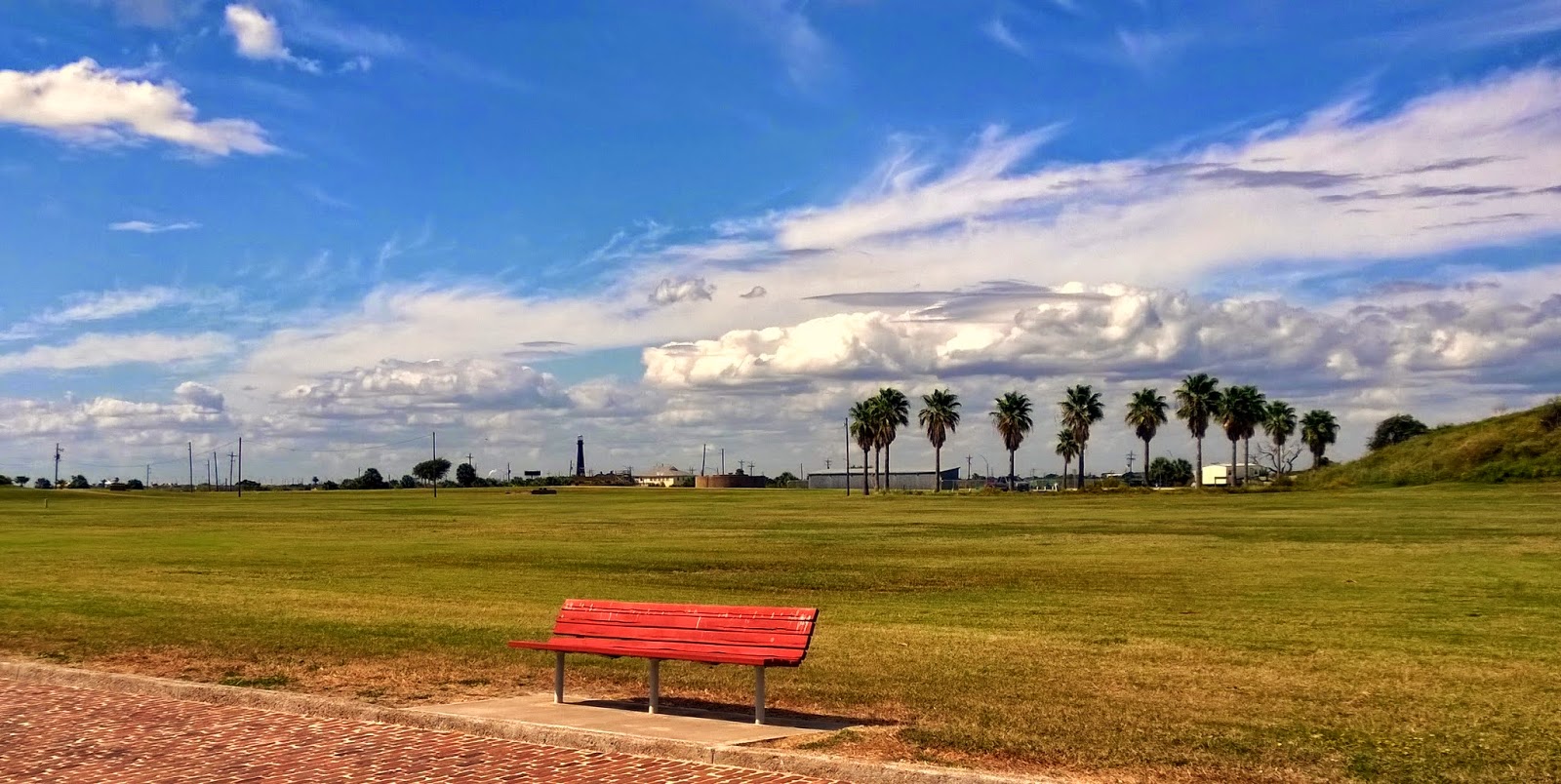 This is a combination picture showing the bench, the lighthouse, Freedom and the edge of the gun battery. 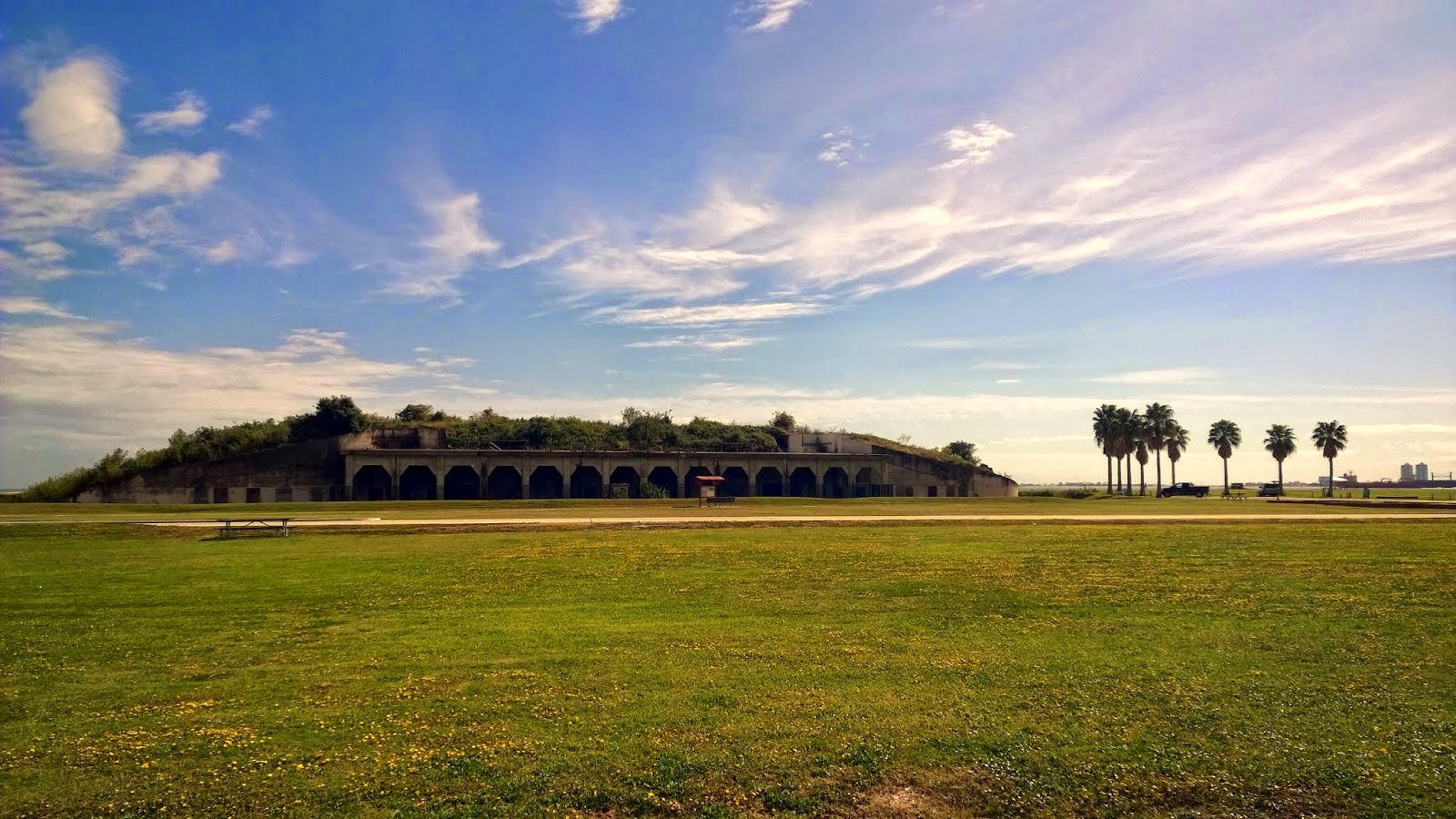 This is the backside of the main gun battery. The openings are where the shells and gunpowder where stored. It is protected from shelling from the ships by the large amount of dirt covering it. Residents of the peninsula used to come here for protection from storms.

That ends the pictures from Fort Travis, the rest are from around the area. 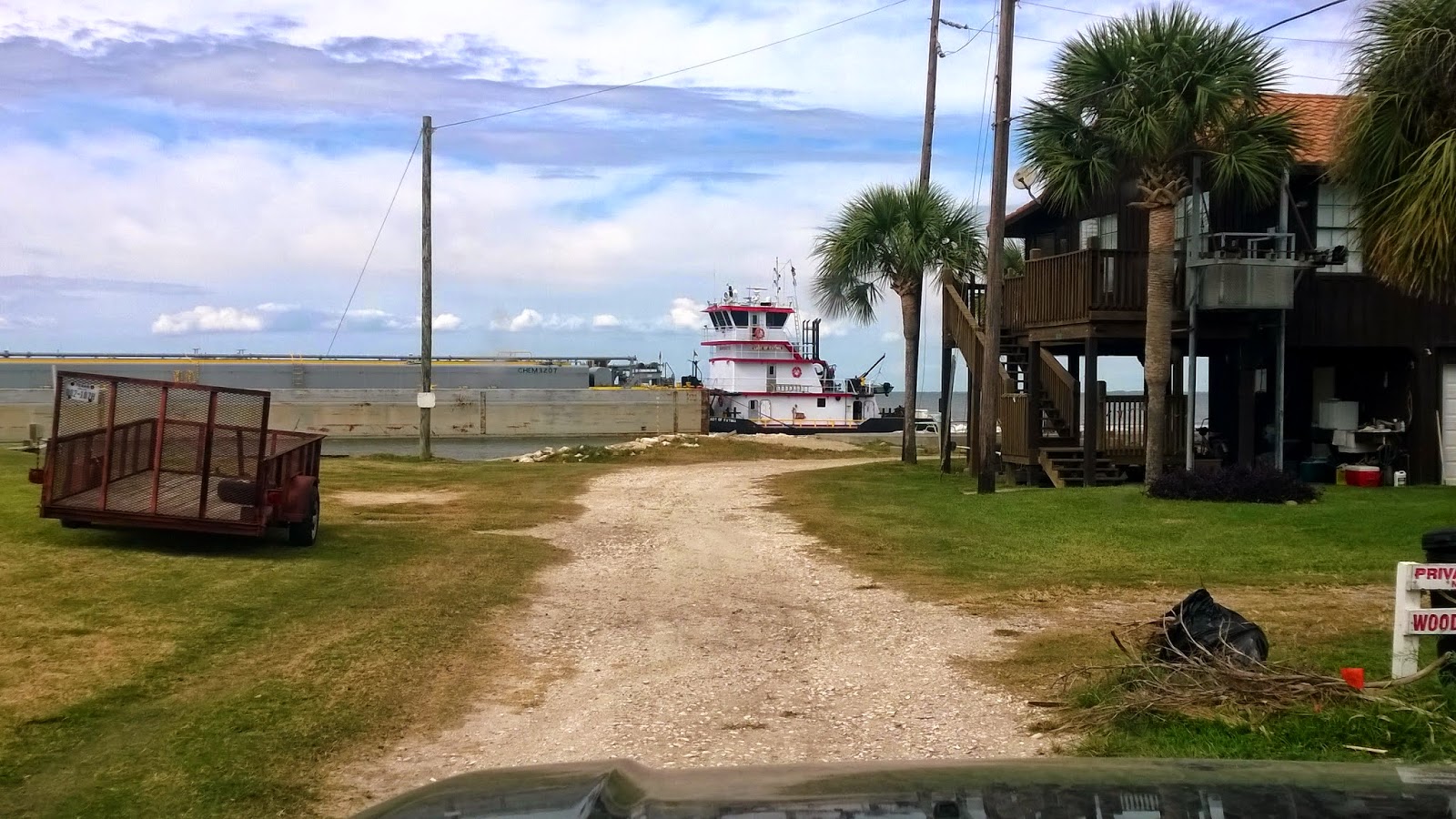 I was riding around some of the neighborhoods on the peninsula looking to see what I could see. I timed it right as I came down this deadend street. That is a tow boat pushing a barge on the intercoastal canal. It was so close to the house you could hit it with a rock. 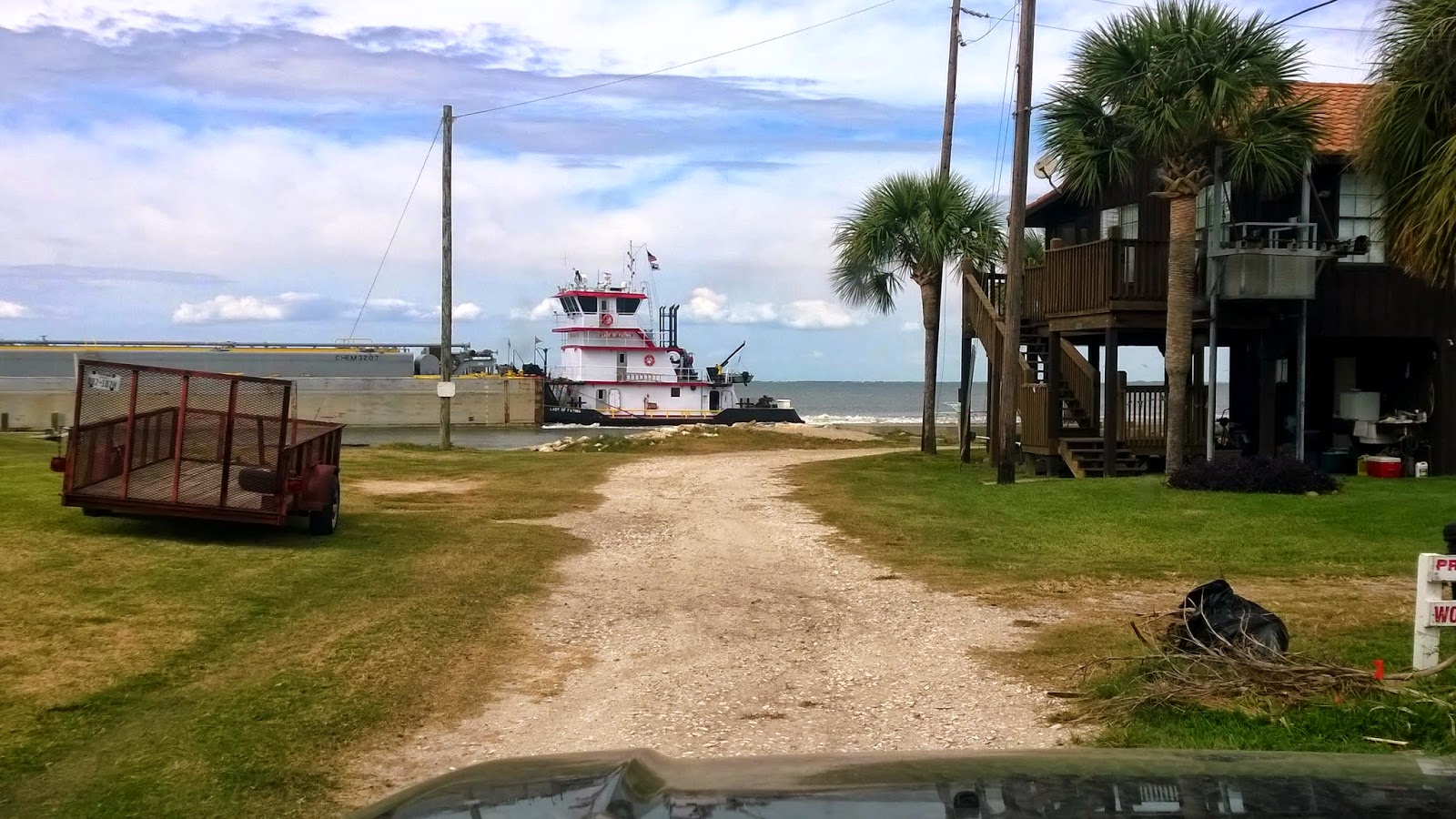 See caption on picture above

The peninsula is cut in two about the middle by Rollover Pass. The pass is a channel that  connects the Gulf on one side to the Bay on the other. During lowtide people descend on this location to fish. That line of cars are along the channel. They are on both sides and they are fanatical about the fishing. Tents and campers were set up so the people would be in the right place at the right time.

This to the Bay side of Rollover Pass. You can see how low the tide is by the mud flats before reaching the water. 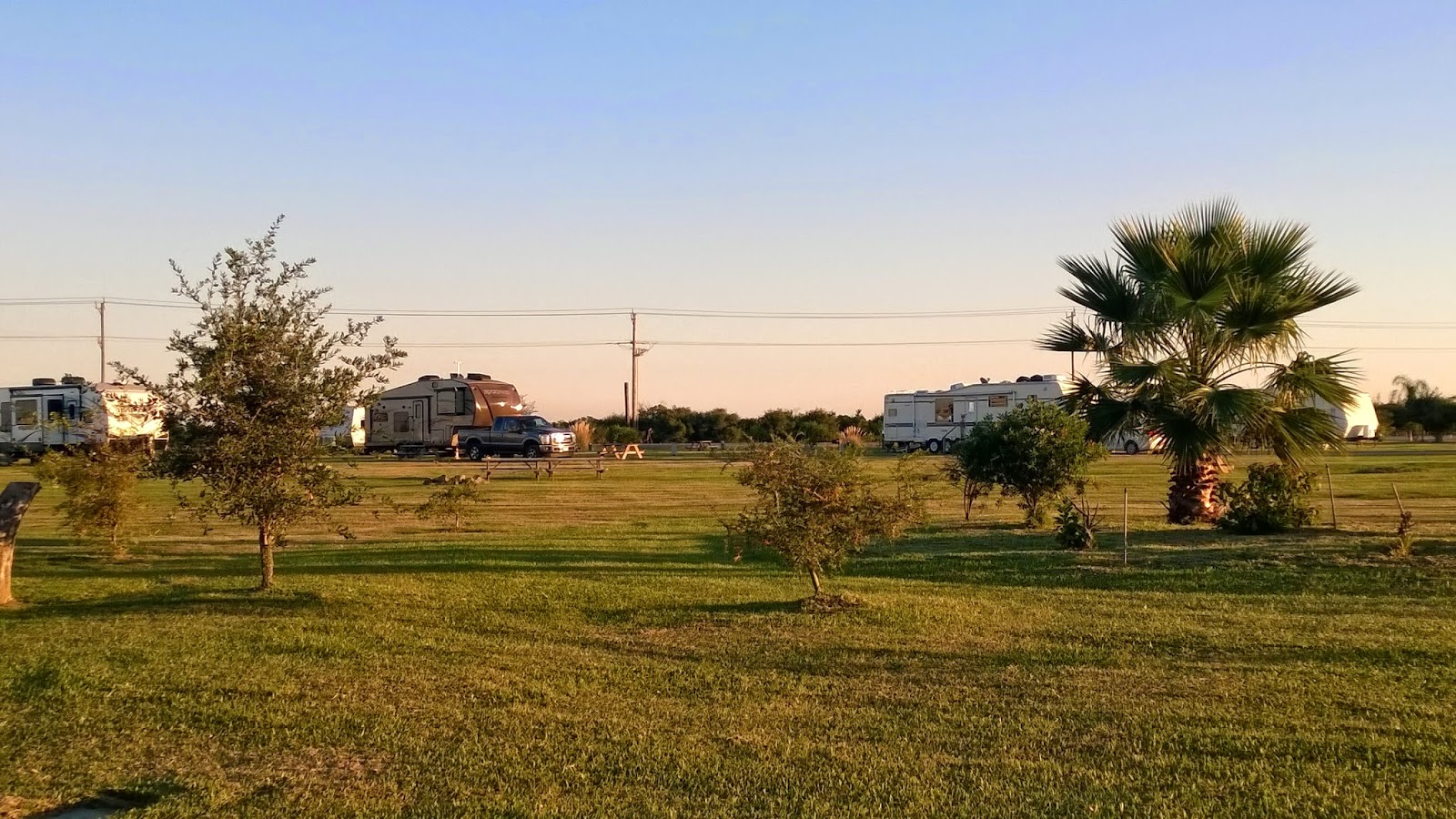 Looking back at Freedom and Liberty as I was walking around the campground close to sunset. 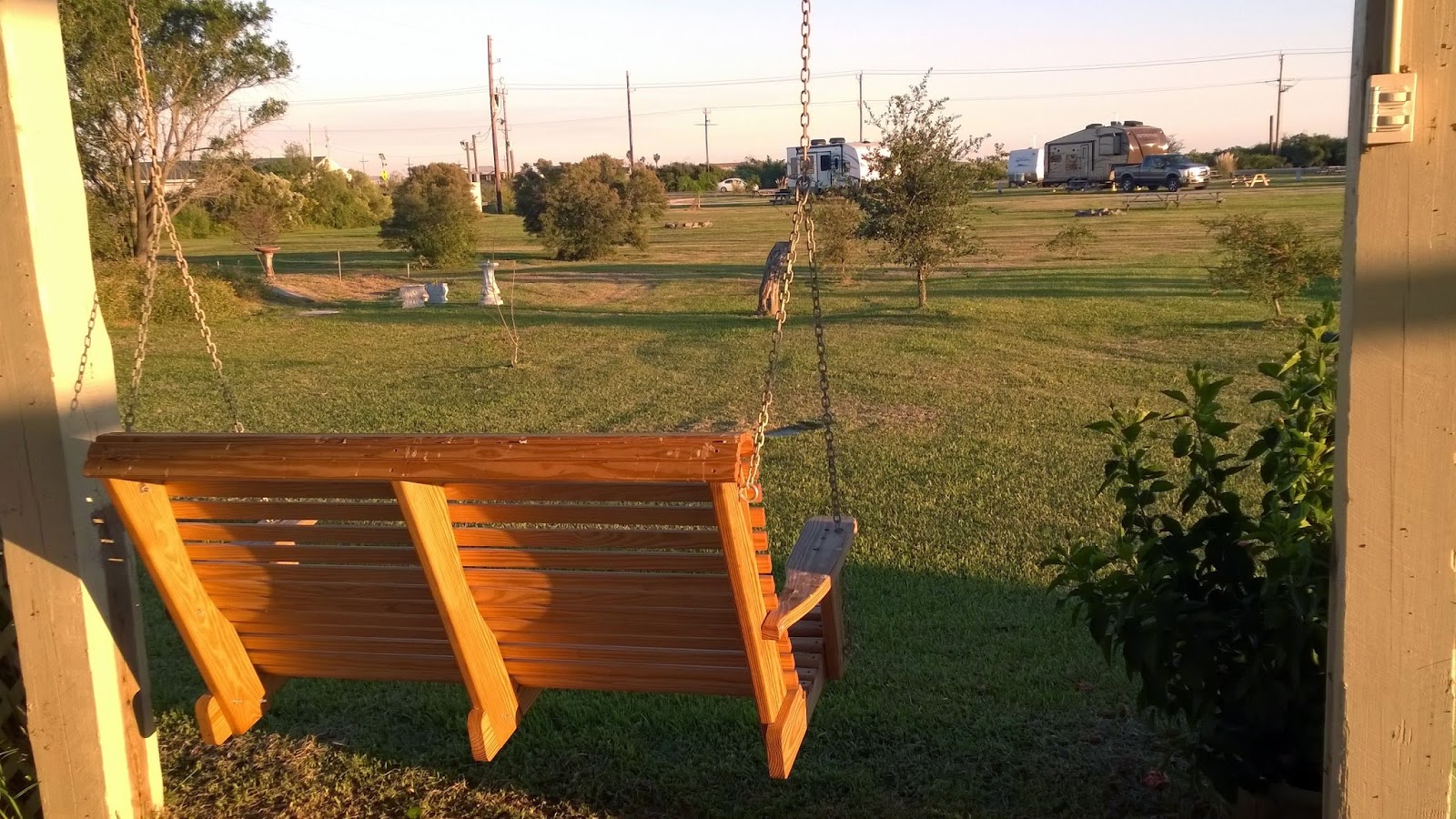 Ut oh! A "bench" swing. And it is looking right at Freedom and Liberty. 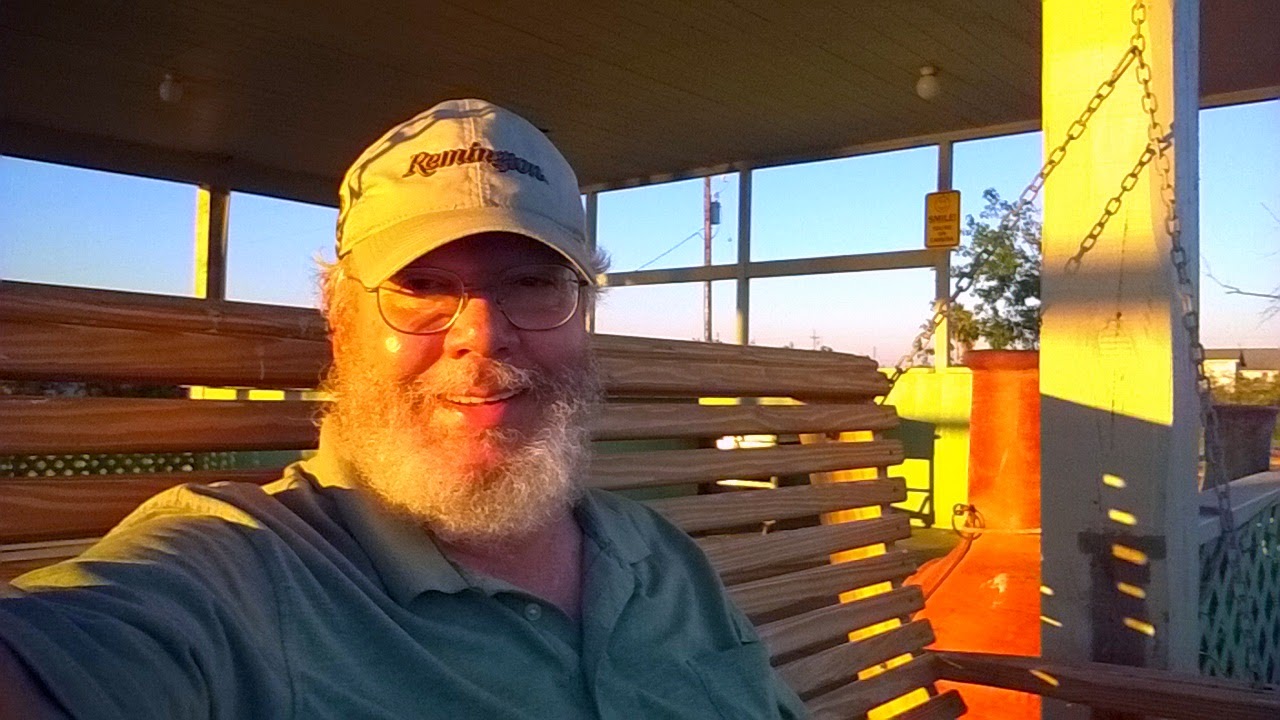 The bench swing was a nice place for a crazy old man to sit and wait for the sunset. 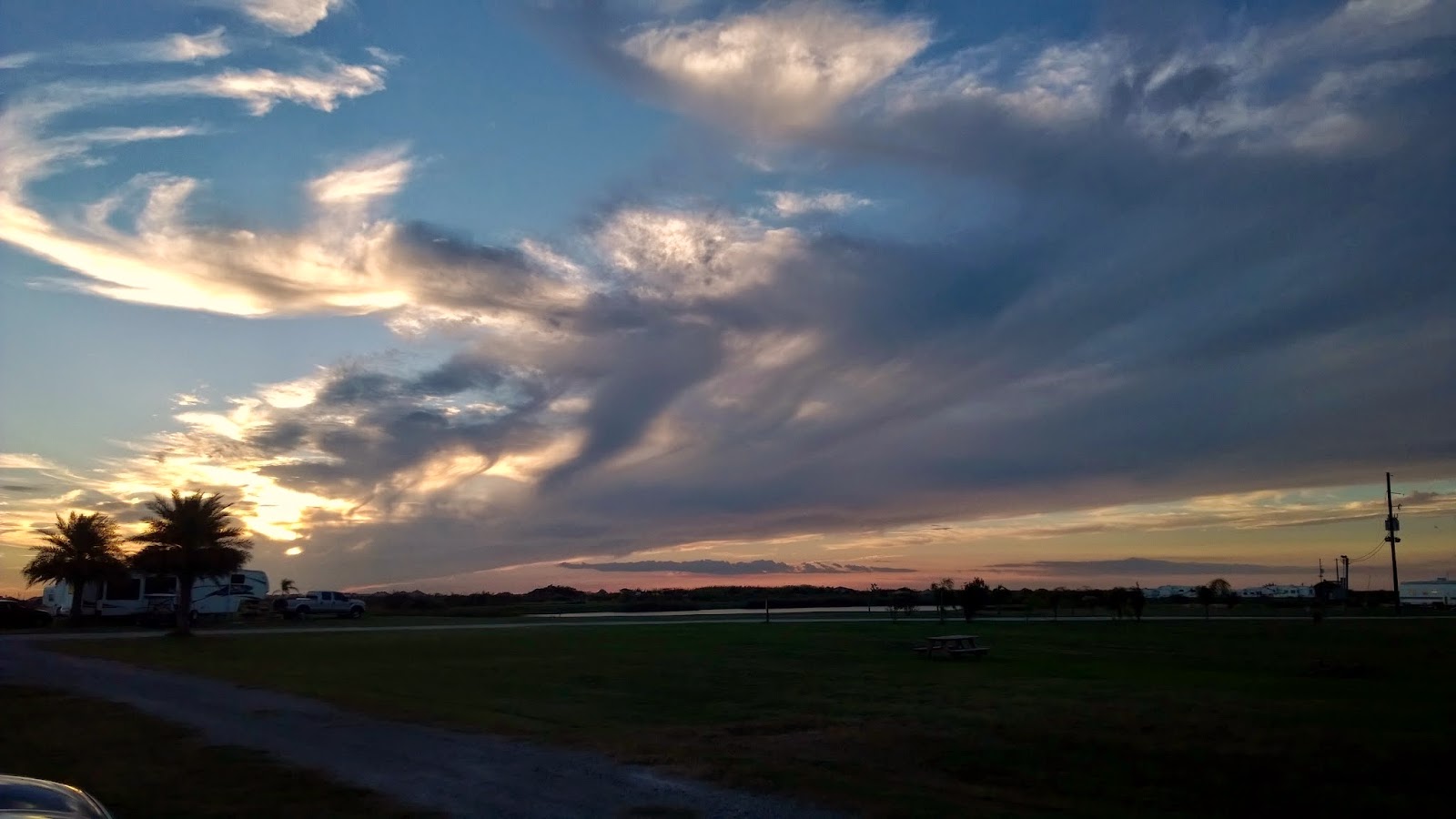 The clouds made this sunset worthwhile.

It was a good day.

Ya'll take care of each other. Cya down the road.
Posted by Darrell at 8:29 AM