The Beach and the Birth of Texas

Crystal Beach is on the Bolivar Peninsula which runs parallel to the Gulf of Mexico all the way to Galveston. The Bolivar Ferry still runs 24 hours a day, free of charge, between the peninsula and Galveston. About half of the peninsula is home to weekend warriors that visit the beach and stay in their beach houses. None of the hundreds of beach houses are older than 6 years old. That is because every one was wiped out by Hurricane Ike in 2008. When Ike came ashore it pushed a wall of water 17 to 20 feet high across the peninsula and Galveston Island destroying everything in its path. Ike is the 3rd most costliest storm in U.S. history behind only Katrina and Andrew. A rough guess is that about half of the places on the peninsula have been rebuilt.

I chose this campground because it had concrete campsites and they were part of the Passport America club. I wanted the concrete so I could slide under Liberty to lubricate her main slide. The concrete keeps me from laying it sand burrs or fire ants. It worked well and Liberty is in good shape. When I checked in, I was told they are no longer with Passport America so the campsite was more expensive. The need for the concrete pad outweighed the extra cost so I paid up for 2 nights. I will move tomorrow to a campground just up the road that is more to my liking.

I drove into the Houston area today to see the place were Texas won it's freedom. The place is where the Battle of San Jacinto was fought. The Army of Texas, led by Sam Houston, defeated a stronger force of Mexicans led by their dictator Santa Anna. It wasn't long after that decisive victory that Texas became the Republic of Texas. It was an independent nation prior to becoming a state. The battle site is commemorated with a giant column, 567 feet tall. It is 12 feet taller than the Washington Monument which would have prompted my mother, a daughter of Texas, to say, "everything is bigger and better in Texas".

In the same area as the Texas Monument, is the battleship, U.S.S. Texas (BB-35). The ship was launched in  1912 and saw duty in both world wars. In World War II, she saw action in North Africa, Normandy, Iwo Jima and Okinawa. She is the only pre-world war I battleship, called "dreadnoughts", left in the world. The word "dreadnought" came from the name of the first big battleship built in the world by the British and her name was the H.M.S. Dreadnought. After she came online, every country that had a blue water Navy started building the big battleships, the Texas being one of those. She was decommissioned in 1948. 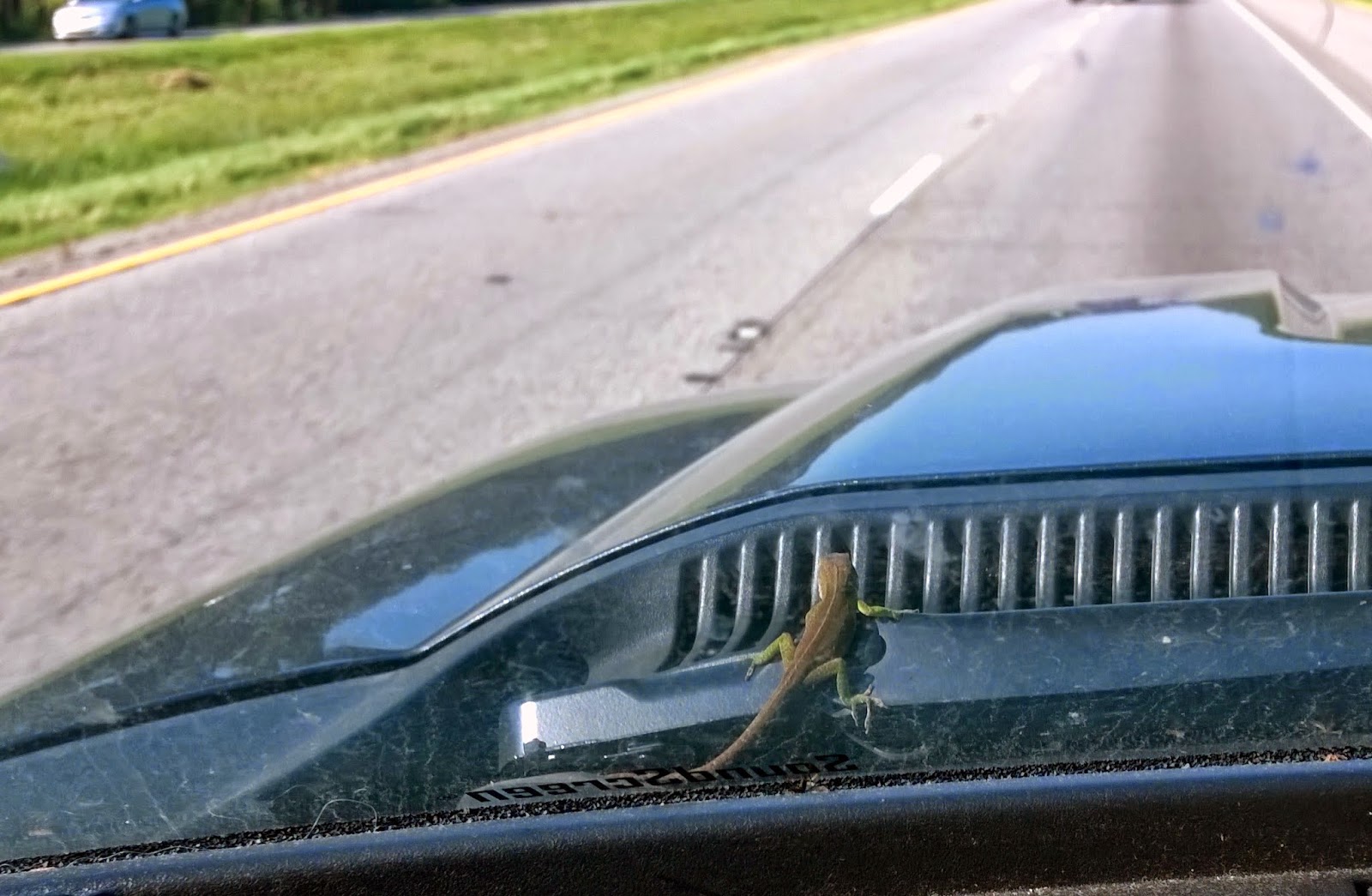 This visitor spent the night on Freedom and hitched a ride. He jumped off somewhere before Lake Charles. I hope he didn't have a family that is wondering where he went. Maybe he was just a crazy old lizard that wanted to travel around. 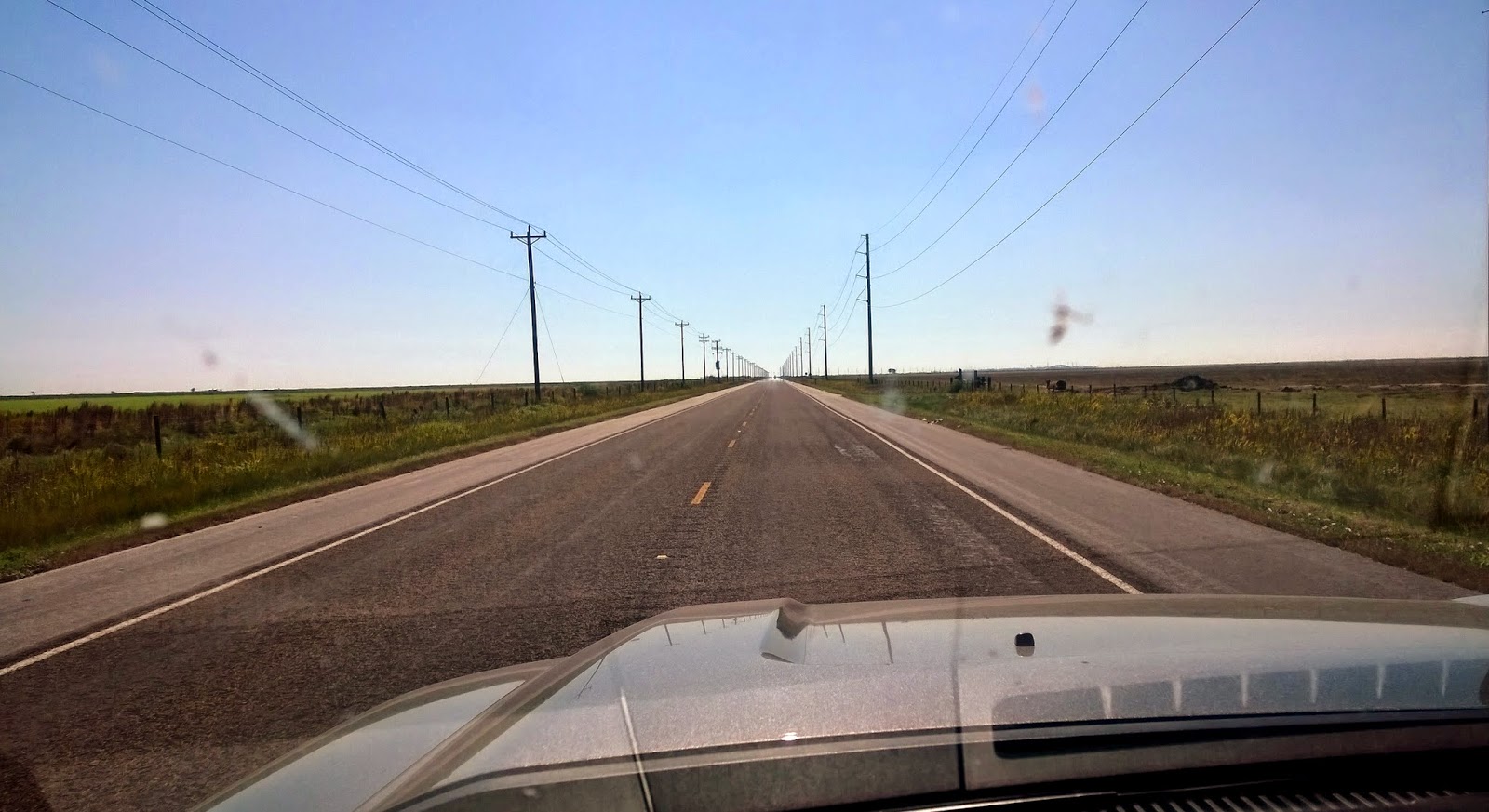 This the roadway leading from Winnie, Texas on I-10 down to High Island, Texas which is on the Gulf of Mexico. It is long and straight with only a few vehicles.

This intersection is where you turn right and enter the Bolivar Peninsula. The road to the left used to go all the way to Port Arthur, Texas but it has been closed for many years. I have been thru this intersection many times in my life and each time it is exciting to see the Gulf again. It was that way again yesterday and I hope it will be that way forever. 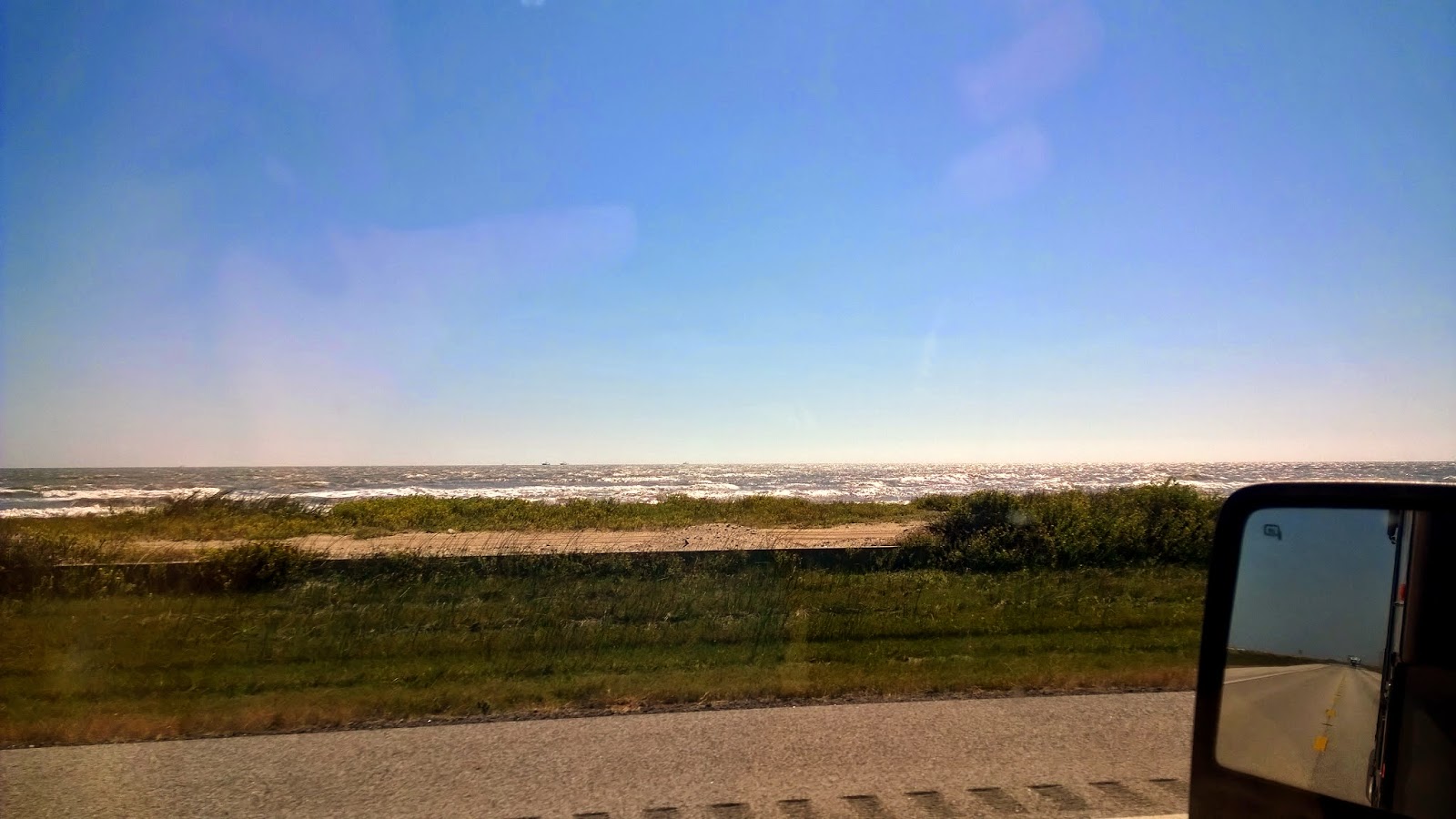 This picture was taken out my side window. I started to crop the side mirror out of the picture but changed my mind. The reflection sort of adds something to the picture. 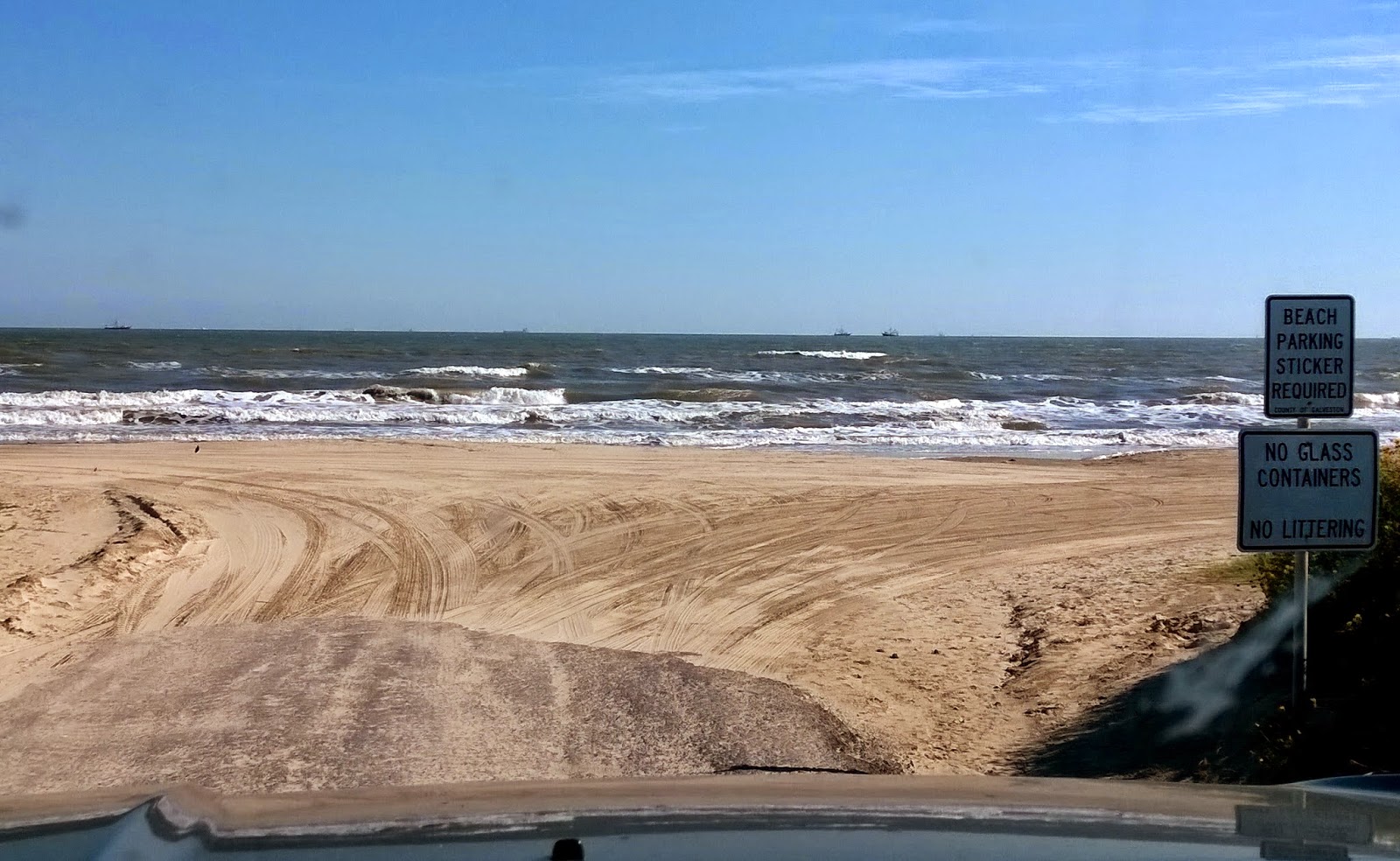 You can drive on the beach if you feel lucky. If you get stuck with the tide coming in, you better have very good insurance. I parked for a little while but kept Freedom on solid ground. 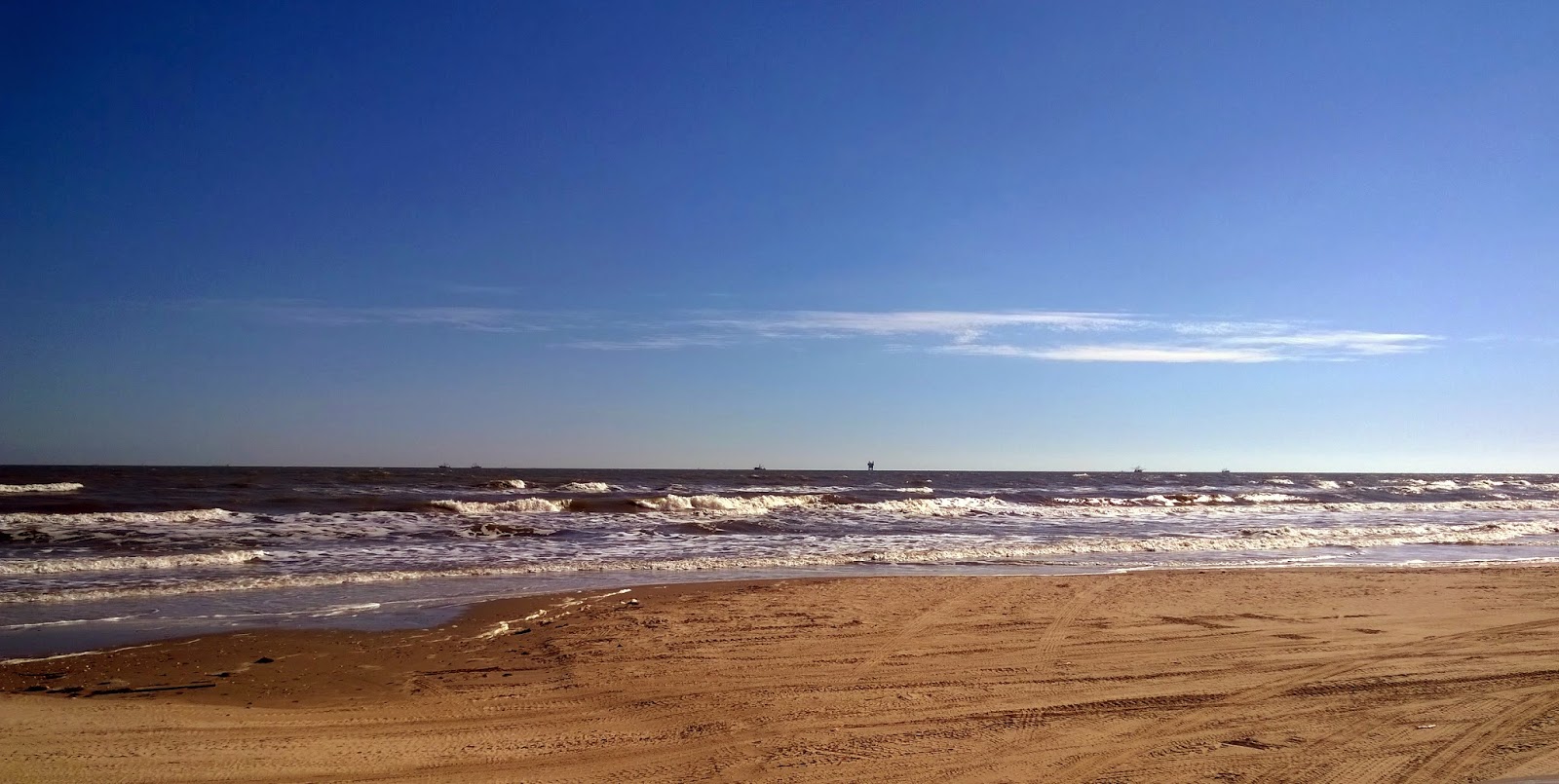 Another picture of the Gulf and beach. The peninsula is about 25 miles long with very few people on the beaches. 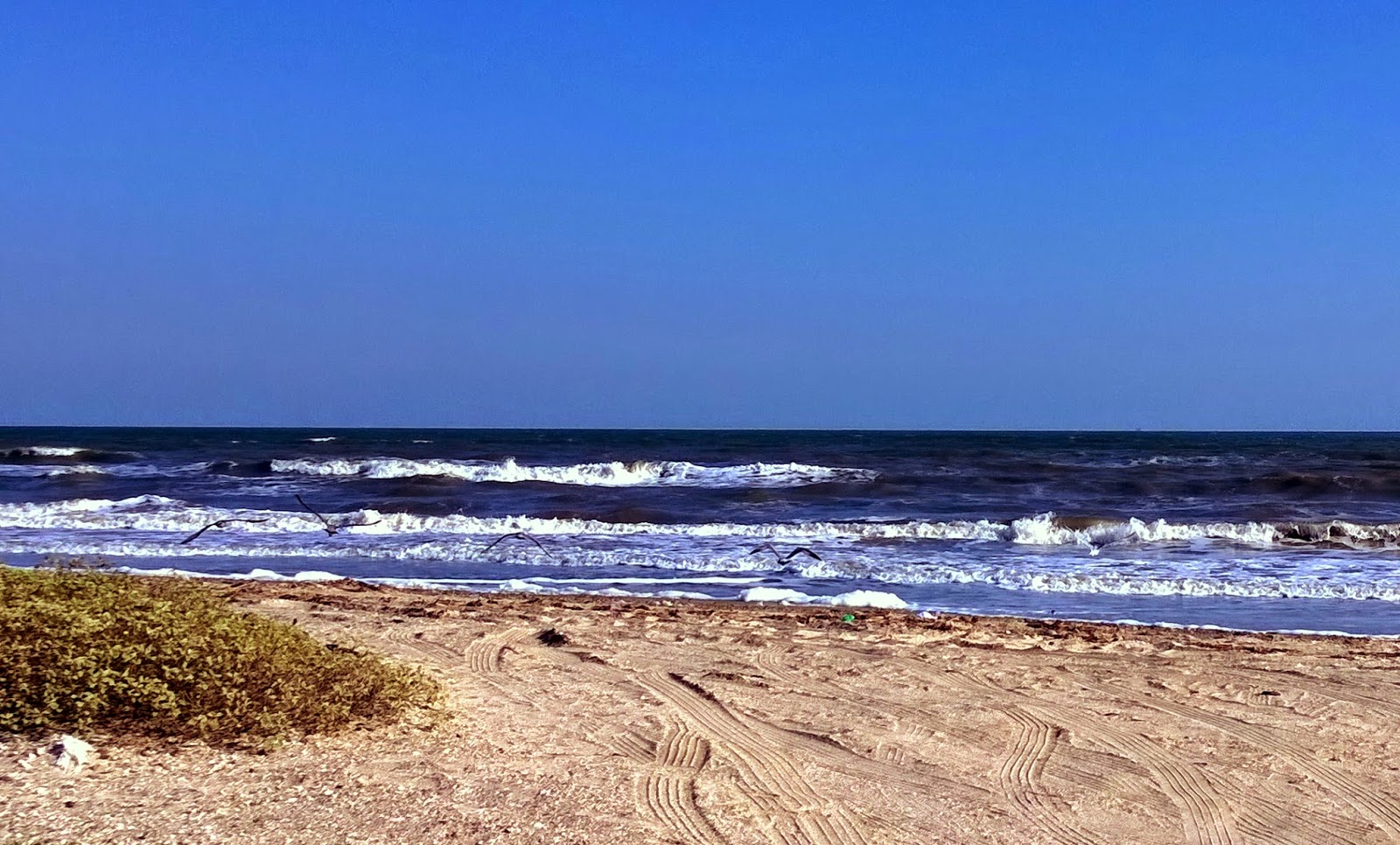 I like this one the best because I was able to catch several gulls taking off in flight. 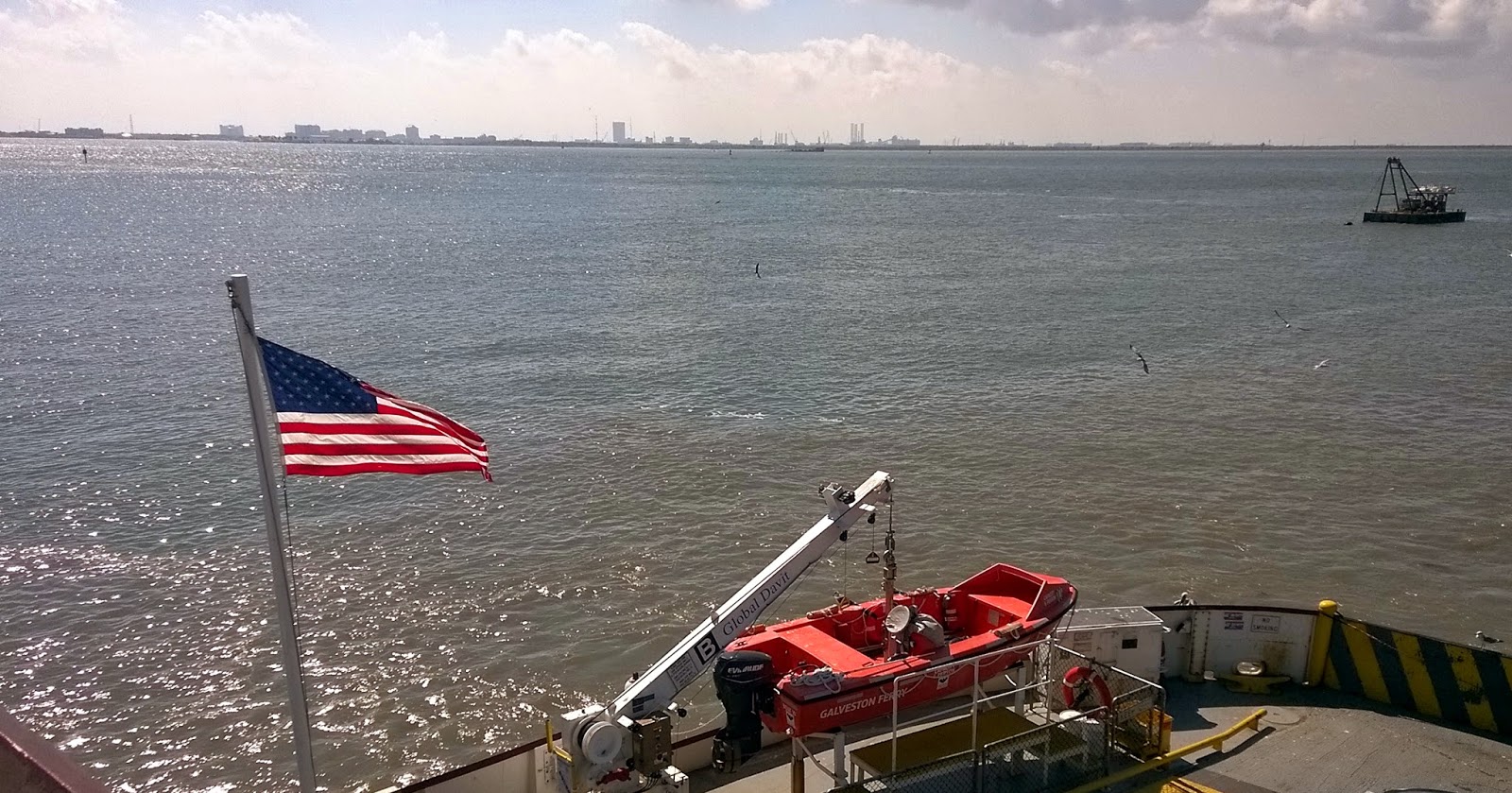 The Bolivar Ferry and Old Glory 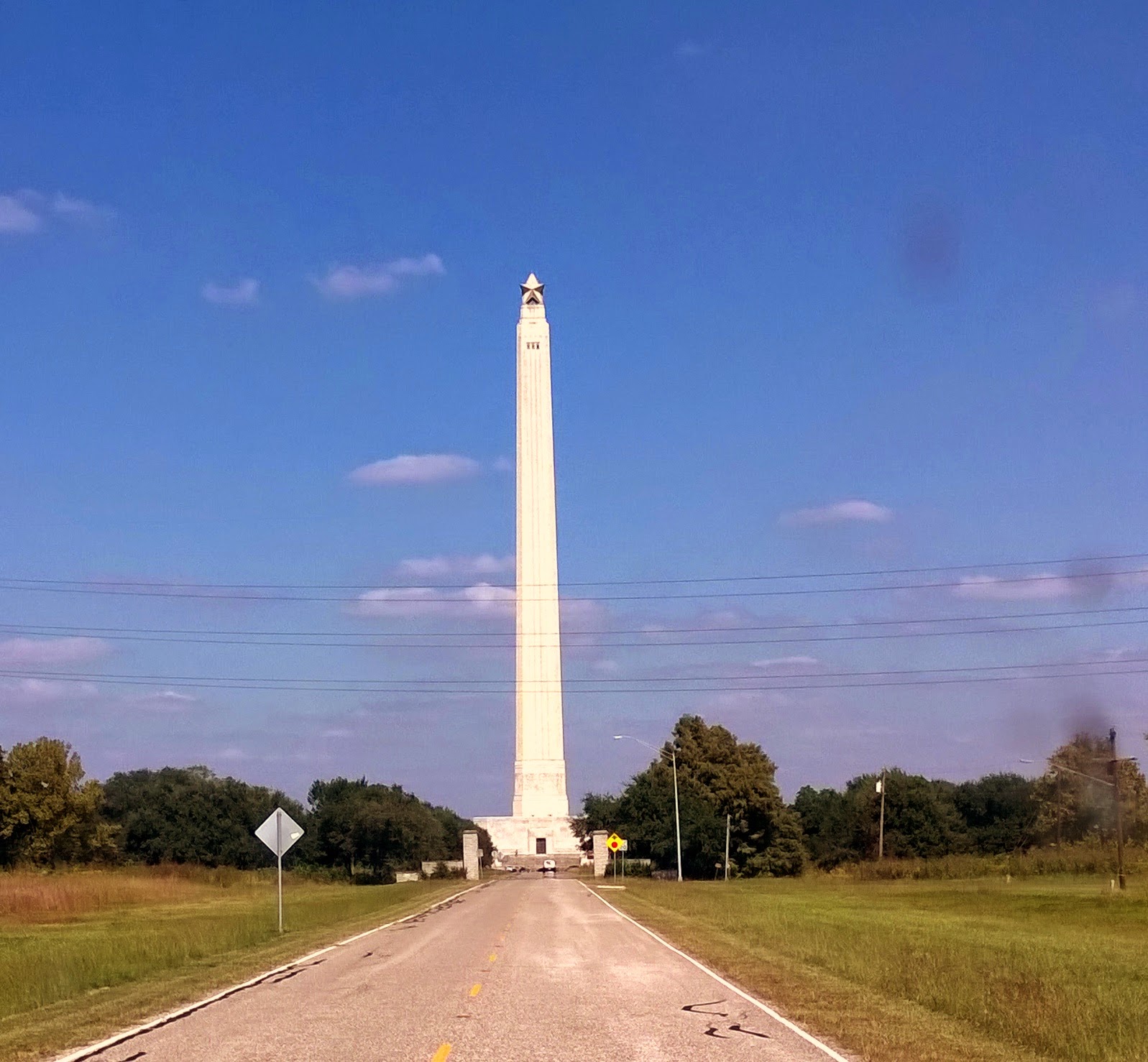 One of the views from the observation deck of the monument. 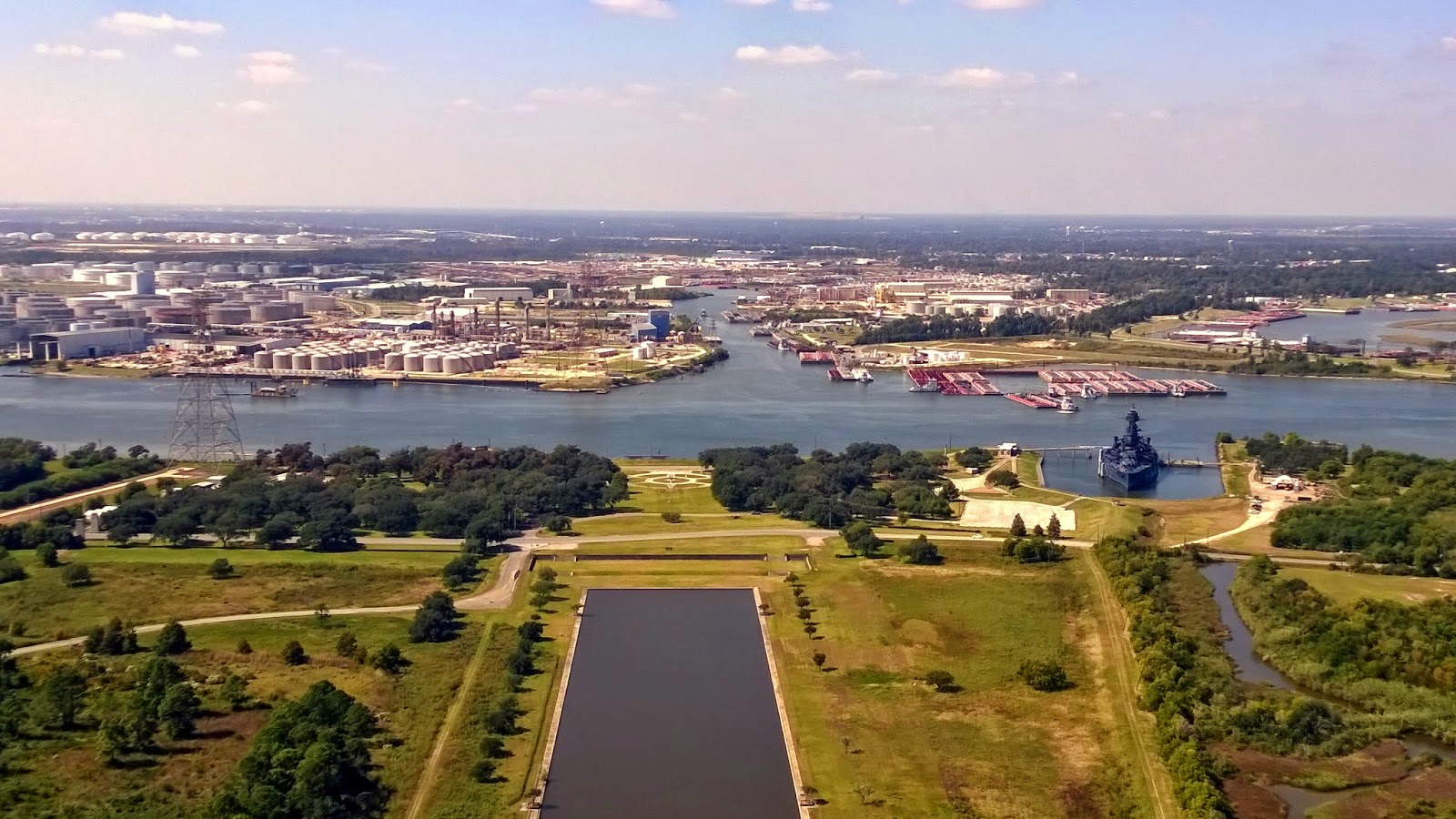 This view is also from the observation deck and has the Battleship, Texas in the picture. 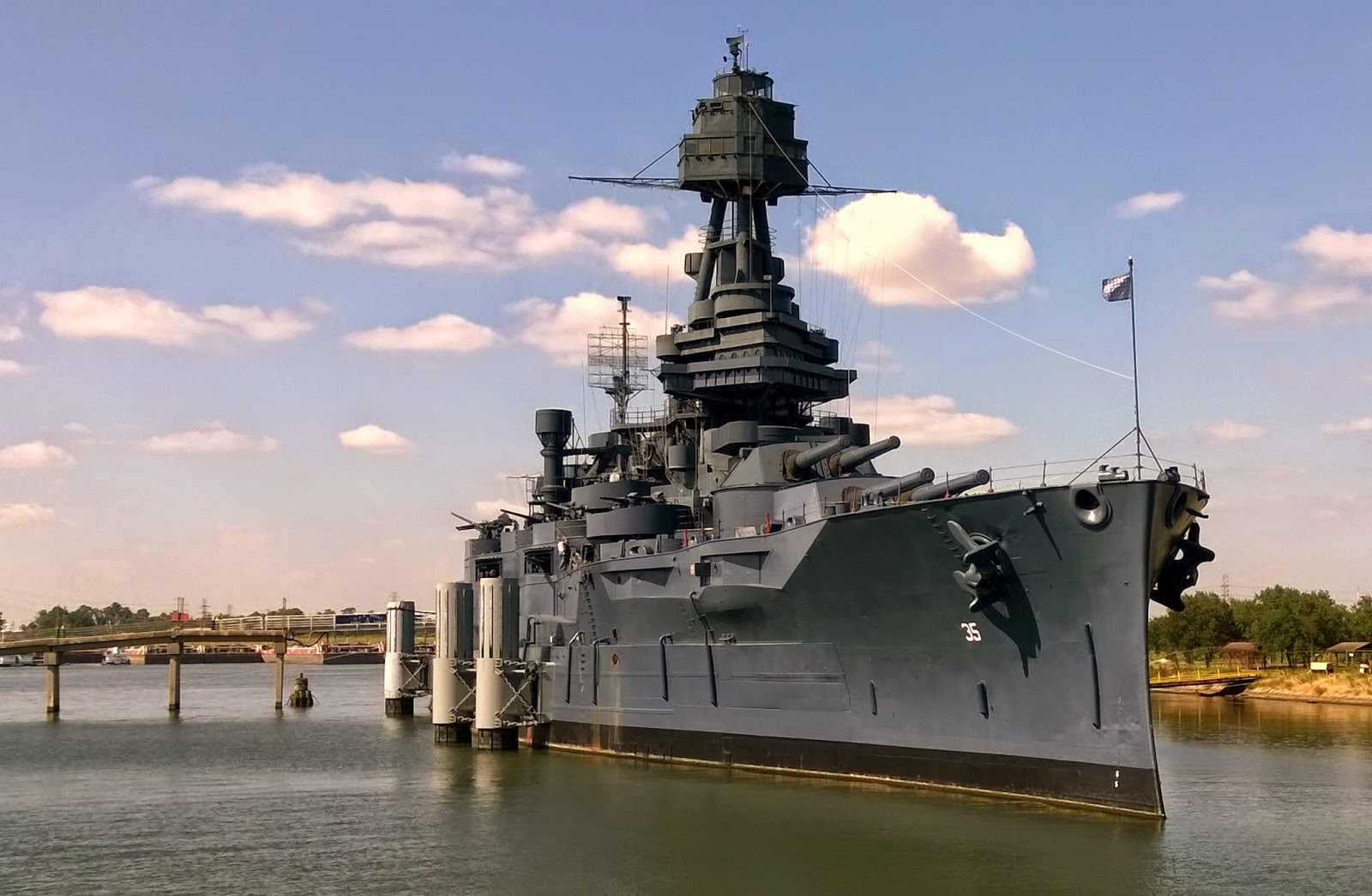 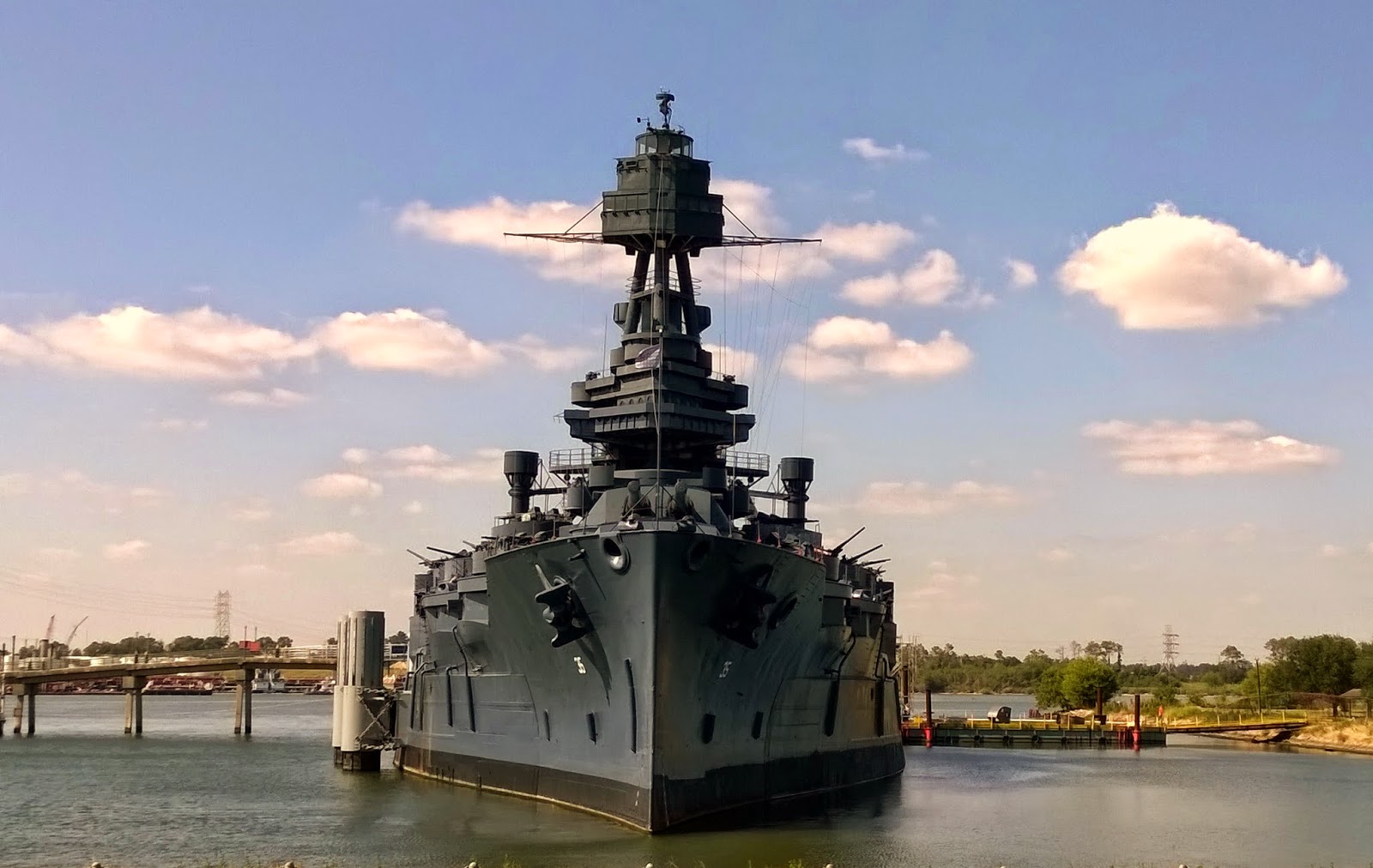 Looking straight on her bow 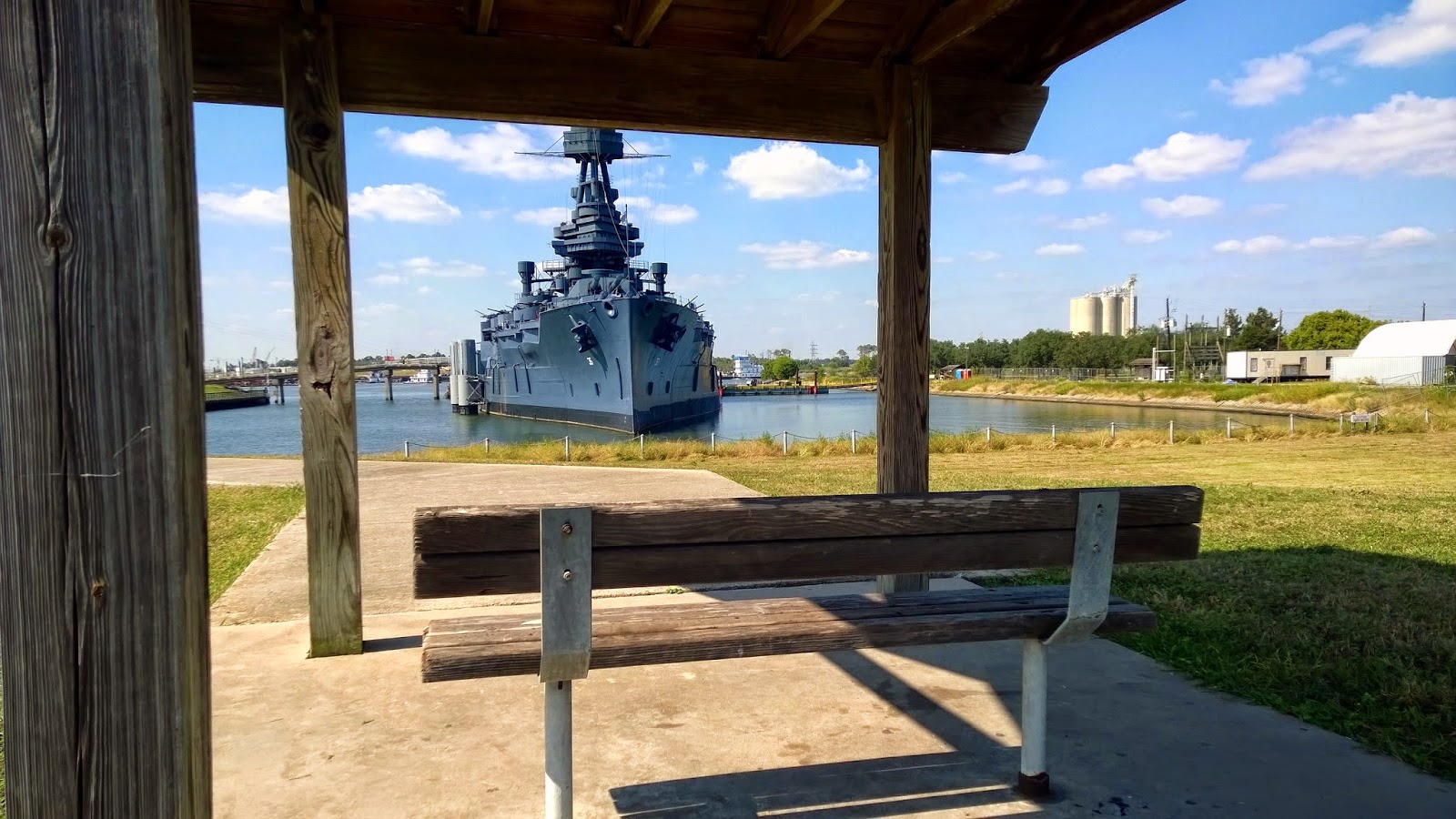 And of course the bench picture with the Texas in the background. You wouldn't be sitting in this bench very long because some "texas-sized" skeeters were hanging around. A couple of them took a chunk out of my leg. 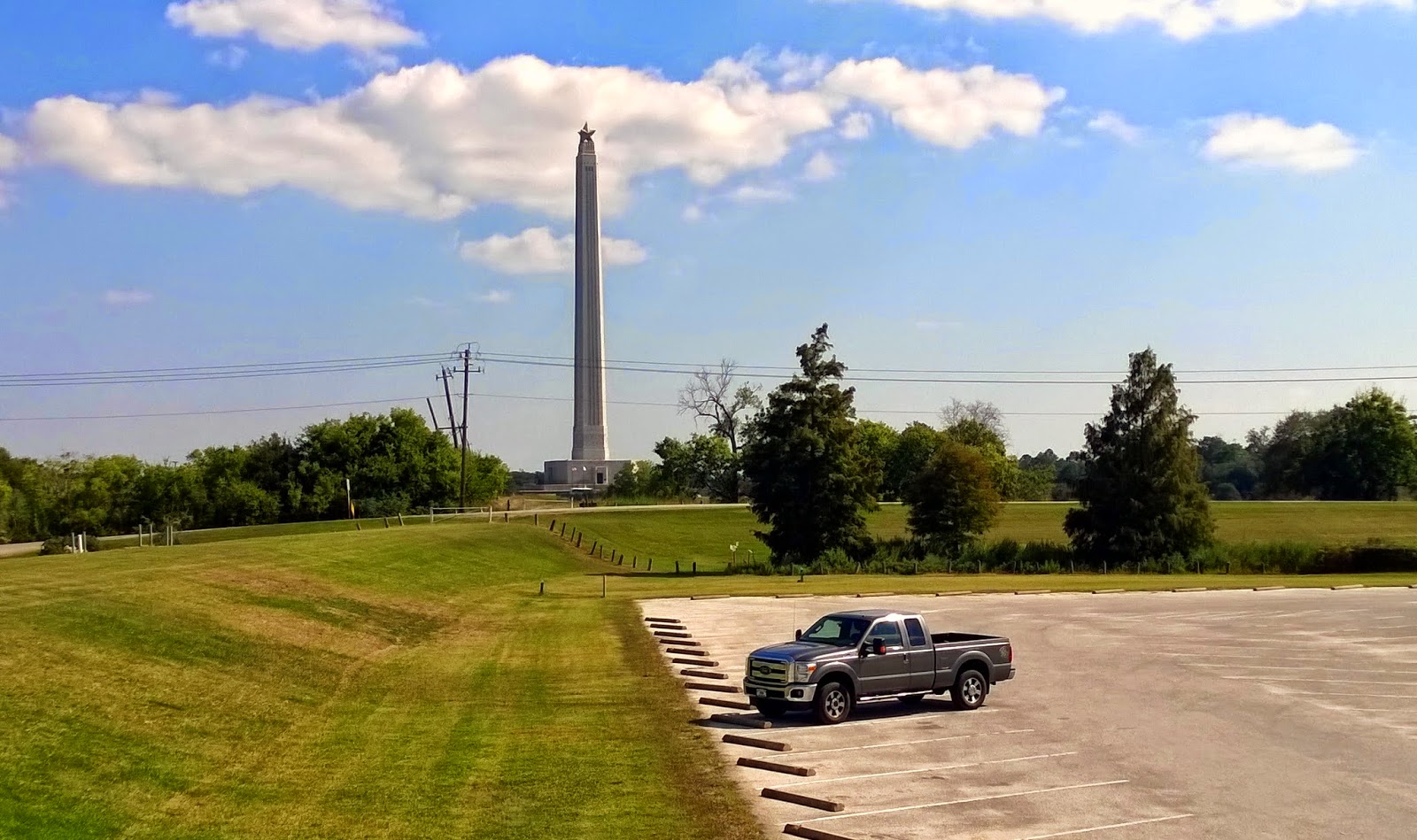 A nice picture of Freedom in the parking lot all by herself with the Texas Monument in the background. 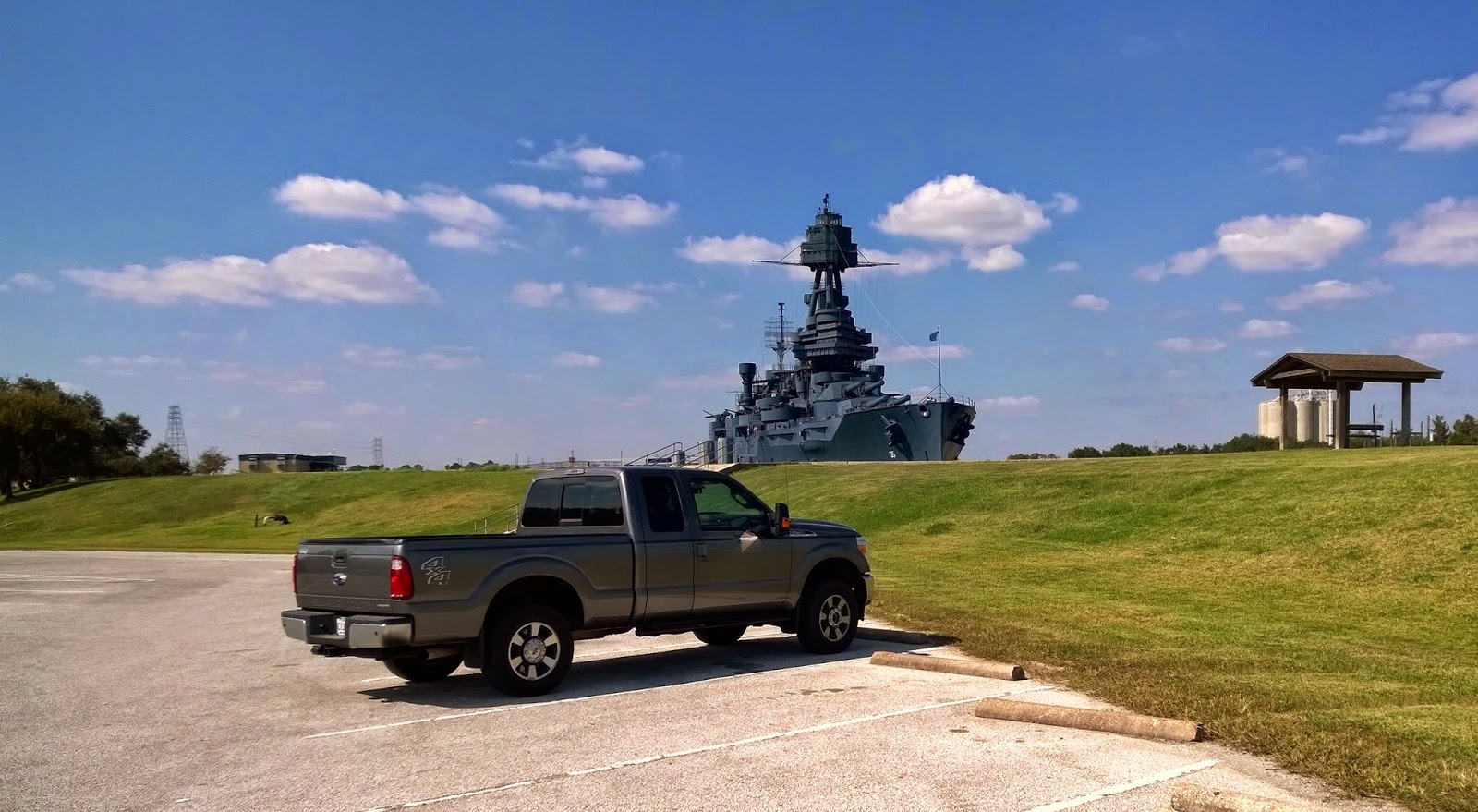 Same parking lot as the last picture but now with the Texas in the background. 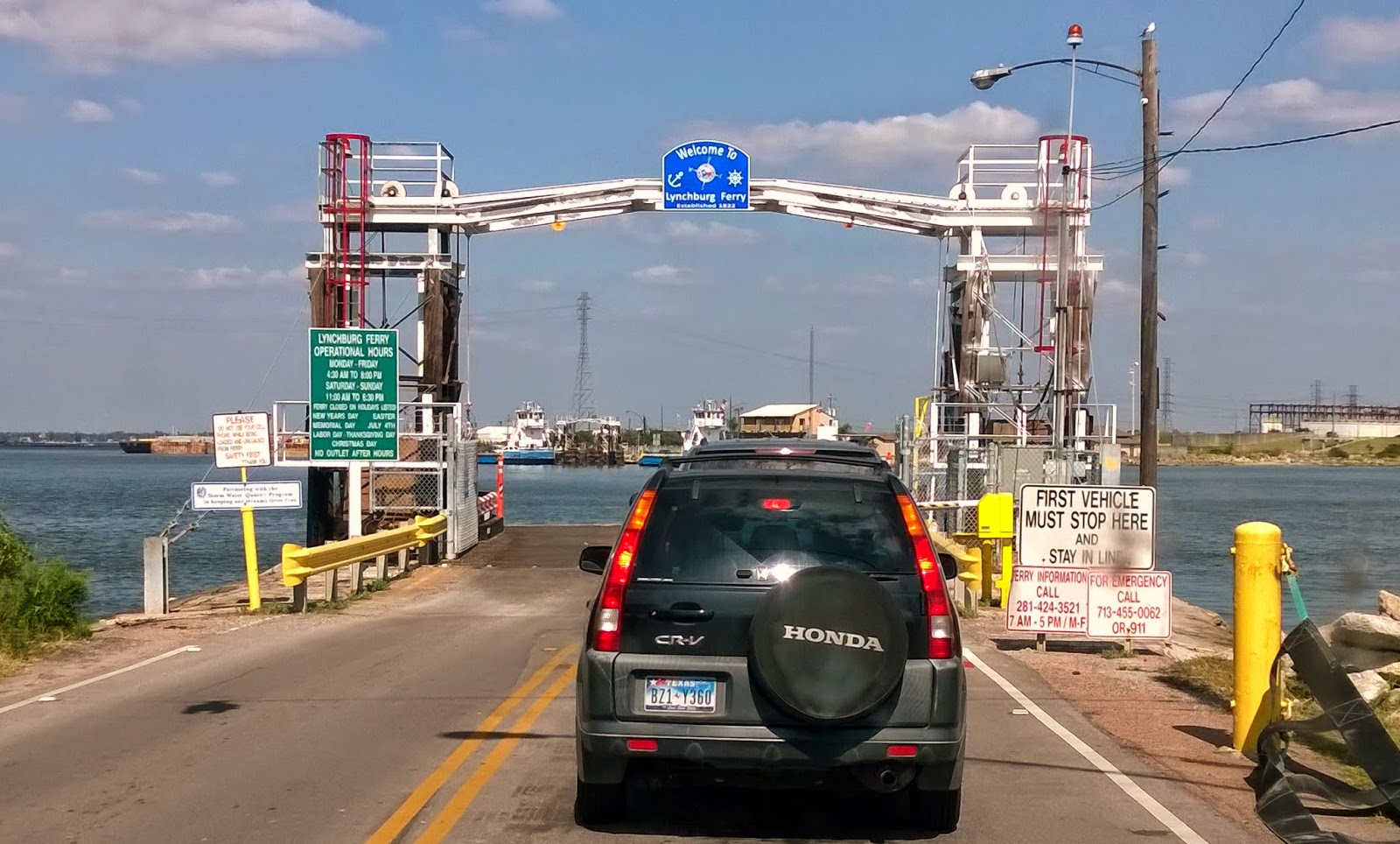 This is the Lynchburg Ferry. It is another free ferry provided by the state of Texas. This is the oldest operating ferry in Texas.

Ya'll take care of each other. Cya down the road.
Posted by Darrell at 9:30 PM