Maybe Trapped?? No Tires! but a Nice Sunset

This campground is on Lake Eufaula which was created back in the 1960's by placing a hydro-electric dam on the Canadian River. It is a beautiful and large lake. The overall campground is split in two by Highway 9. They should either close the side I'm in or do some serious upgrading. It doesn't appear to have been upgraded since the 60's. Several campsites are almost impossible to use except by tent campers. Once I drove to my campsite and saw it, I should have said, "Nope, ain't even gonna try to get in there". But I guess I had a fleeting moment of hardheadedness (sure glad it isn't permanent) or maybe I can blame it on the remnants of my sickness. Either one, may have caused me to regret staying in this great campsite. I was able to get in without causing any damage to either Freedom or Liberty but I'm not really sure I can get back out. You would think, if you can get in then you can get out. But that isn't always true when towing a trailer. In this case it depends on the angle between the road and a certain tree, as well as how far to the side I can go without hitting some overhanging limbs. The overhanging limbs barely cleared Liberty on the way in but if there is any more sagging, she may get a back rub on the way out. We will see how it turns out but I've been very anxious ever since I set up camp in this great campsite overlooking the lake.

I've been looking for new tires since Iowa. They are for Liberty. Her current tires are about 3 years old. They have enough tread remaining but at least one has signs of small cracking between the treads. I've been looking for a place to pull in while hitched up and get new ones. I thought I had a place in South Dakota but got a bad vibe and didn't do it. I got a recommendation about a place in Sioux City, Iowa but that didn't work out either. Neither did the one near Topeka. I finally thought about getting her new tires at the same place I got the last ones. It was in McAlester, Oklahoma. It was the day I had the blowout on the Indian Nation Turnpike while on my way to Duluth and Lake Superior. They did a great job in a short amount of time. So it only made sense to schedule an appointment when I got closer and get it done. I made reservations at this campground and the next one so I could be at the tire place early one morning, get the tires on and still be at the next campground by the afternoon. That is one of the reasons why I've been only staying 2 days in the campgrounds lately.
Well, things were going pretty good until I called the tire shop to schedule the appointment. I was calling 10 days before I would be there so as to give them plenty of time. But, instead of getting a scheduled time, I was told they only had one Goodyear Endurance tire and it was a year old. I asked if they could get 4 new ones before I got there and they said probably not. They hadn't received any Goodyear ST tires in months and months. All the Goodyear dealers around them were in the same boat. Apparently it will be late fall or early spring before Goodyear will make some more. I'm not sure if it is worker or material shortage. I'm not even sure yet if they were telling me the truth, but since they lost a sale of 4 tires, I can only assume they were truthful. Luckily, I started looking early enough so I have good enough tires to make it back to Louisiana. But,,,,, there's always a but isn't there. But, today is moving day and I'll be traveling over the Indian Nation Turnpike. The same turnpike that blew out one of Liberty's tires last time (notice how I blamed the turnpike). I hope by going south instead of north I will break the bad JuJu of the turnpike. I'll be looking for the spot where it happened.
Today is day 7 of my sickness and I am feeling much better. My fever topped out at 99.9 on day 3 and been below 99 for the last 2 days. According to Google, I shouldn't even consider it being a fever until it get over 100.4. I stopped for gas the other day and there was a very nice looking Redheaded woman getting gas at the next pump. I foolishly thought, I'll just ask her to feel my head and see if she thinks I'll be OK. After taking the first step towards her, I noticed her face looked like she was either mad at something or basically mean. So, I stopped and thought, "She may feel my head and lie to me about being OK since she is looking meaner by the minute". Whew, I dodged a bullet there. Anyway, I really didn't need her advice because I'm feeling much better. The coughing has decreased tremendously since yesterday. A few more days of healing and I'll be right as rain.
"But, at the end of the day, there is always a sunset. You can't always see it, but it is always there." 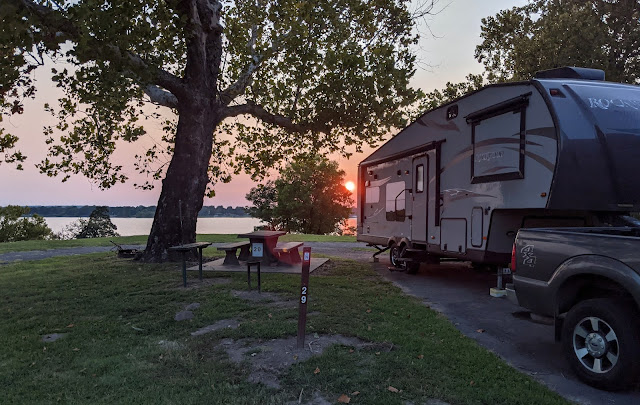